Leading By Faith and Example 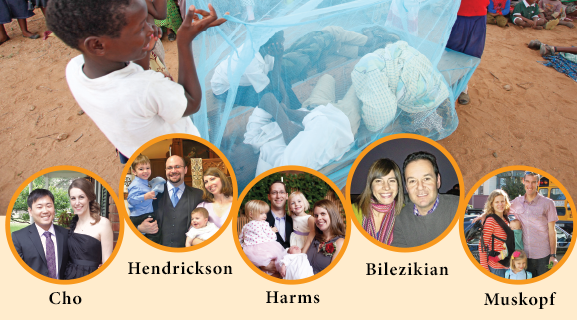 by Melanie Ave and Martha Mitkos

At First Lutheran Church of Boston and Trinity Lutheran Church in Worcester, Mass., there is a group of young professional couples serving as role models of Christian stewardship.

The couples faithfully support their LCMS congregations, but they also make it a priority to support other worthwhile causes. For each of them, the Lutheran Malaria Initiative (LMI) — a partnership of the LCMS and Lutheran World Relief — struck a chord.

They all gave significant donations to support the initiative, which aims to mobilize U.S. Lutherans in the global fight to eliminate malaria deaths in Africa.

Pastor Ingo Dutzmann of First Lutheran Church of Boston, where most of the families attend and who played a key part in spreading the message about LMI to his congregation, said he hopes the selflessness of the families serves as an example to others.

“Most of these folks I’ve prepared for marriage, baptized their children, rejoiced with and cried with,” Dutzmann said. “They are my extended family, and I love every one of them.

“Hence, when I ask for an extraordinary commitment they listen and pray about it. Plus, LMI sells itself with its arresting message.”

The families stand out among the generous donors who support the ministries of the LCMS. Many LCMS supporters are retired individuals who give from their investment earnings, not income, said Terry Biesboer, senior mission advocate with LCMS Mission Advancement.

“As I met these families, I witnessed young families with small children, new mortgages, real people not made up of wealth,” he said. “But they lead by their faith and encourage others within their congregations to look outside themselves to make a difference.”

“Young people bring a perspective, capacity and a special heart toward mission and a compassion that helps shape how the church fulfills its mission over a longer period of time,” he said.

Joy Harms, 35, a part-time speech pathologist and mother of three, said LMI touched her heart because most of the 700,000 people who die each year from malaria in Africa are pregnant women and children.

They lead by their faith and encourage others within their congregations to look outside themselves to make a difference.”
— Terry Biesboer, senior mission advocate, LCMS Mission Advancement

“To think there’s a world of moms out there who … watch the other children in their community die and say, ‘Please Lord, don’t let that be my child,’” she said. “I can’t fathom that. It’s so different from our life experience here. But there by the grace of God go I. What if I were born in Africa instead of the U.S.? It could be any of us.”

Marketing executive Frank Cho, 39, said he became more impressed with LMI the more he learned about it. He liked the role LCMS partner churches in Africa play in implementing malaria education and prevention programs and distributing bed nets in their communities.

“There really are boots on the ground there making a difference,” he said.

Chris and Ann Muskopf, both 37, said they appreciate the fact that 100 percent of donated funds go directly to LMI’s work in Africa.

“It made so much sense on so many levels,” said Ann Muskopf, an occupational therapist. “And most of all, the Gospel is being shared as people are being saved, hopefully in body, but also in soul.”

Frank Cho’s advice to others about what causes they should support? Look inside your heart.

His wife, Sandra Osladil Cho, 35, a marketing executive, said she started giving at age 11, using her babysitting earnings. Her support of LMI was just an extension of what she learned as a child about stewardship from her Lutheran school teacher parents.

“I’ve never missed what I’ve given, and I don’t expect that to ever change,” she said. “I’ve always been very well provided for by God. I’m very blessed and there are plenty of people who aren’t. If I can share, I love to.”

“Giving to others makes you feel good, lightens your heart especially when it’s going toward good causes in which you can see an impact,” he said. “I give as much I can, as I’m able. I want to be able to share in the wealth that God has helped me create.”

Most all of the families said they see themselves as stewards of God’s money.

“Imagine the faces of the people in need,” Joy Harms said. “Imagine standing next to them in conversation. Imagine them in your home, looking at your flat-screen TV, your full pantry. And then imagine telling them, ‘No, I don’t have enough to share with you.’ Of course you do have enough to share.”

Jeff Bilezikian, 45, who works in real estate, said he believes in the good intentions of faith-based organizations and often supports their work.

“I think like anything else, they make mistakes too, but they have a pure, good meaning at heart,” he said. “If you have the opportunity to give, I think you just have to do it.”