If I was going to sell you on a new church planting movement it might go something like this… “Hi, I’m Rev. Steve Schave, director of church planting for the LCMS Office of National Mission. I’m a former entrepreneur, corporate executive, and adjunct professor in leadership/management/business technology. I went to the seminary where I was trained up to be a missionary. I was sent down into the Bible Belt to plant a church, in a place where there was no Lutheran presence, using a well thought through approach. And then I used that approach again, to help restart a struggling historic inner city congregation in a suffering community.

I have a process for how to plant distinctly Lutheran Churches that become enmeshed in their communities. And I have been given the charge to help to lead the LCMS in a new church planting initiative. And I’m here to tell you, that this will take a fresh look at the U.S. as a domestic mission field, and it will take a Church planting movement!”

And all God’s people said a not so resounding “Hip hip hooray! — another movement, another initiative, another toolkit, meh.” But you heard me right: we NEED a Church planting movement. Not a fan of words like movement or initiative? Does it conjure up thoughts of business-like programs that are artificial and outside the realm of the Church? Well, hear me out. I am a child of the awesome 80’s, and while things weren’t perfect, it can’t be denied that times, they are a changing.

I think we have seen what the world has to offer as the new modern family, what passes for modern romance, and we have heard our share of the new and improved modern fairly tale… we live in a world where it is anything goes, with gods of our own choosing, and the world just seems to get more embittered and jaded and hopeless, as we slide into a post-Christian era. Now I don’t know what it was like to be a parent raising a child in Ninevah, or Sodom, or Jerusalem for that matter when Jeremiah was sent, but I do think with the modern city it may actually be quite reminiscent.

I do know that when Jonah preached in the city of Nineveh, the people, and even their king, repented when they were convicted of this gaping chasm that existed between them and God that would lead to their destruction. I do know that for Sodom, judgment day came in the midst of their stubborn rebellion, and they were destroyed. And what of this Jeremiah, the one who we call the weeping prophet… more like party pooper if you ask me.

Jeremiah came to a city that just wanted to be left alone. They had a confession of faith that said don’t rock the boat, let the good times roll, and just go on with your bad self. Just look at our community, how happy we are, we have so much peace, now join in the party and strike up the band. They defined holiness on their own terms; they judged one another on their external works; and they invited others to come along.

But Jeremiah knew their mega church was made up of whitewashed tombs and the writing was on the wall. And he proceeded to rain on their parade… he wasn’t going to give them a guitar hero LORD, a cupid LORD, a Santa LORD, a life coach LORD, no idol fashioned in their politically correct image as not to upset the king. He gave them the one true God in all holiness and reverence. He called the people to repentance lest they perish, just as God called him to do. You see – Jeremiah was a planter sent by God. 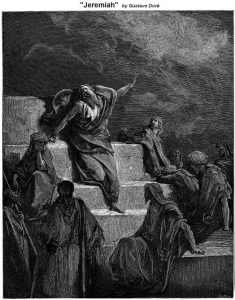 “Behold, I have put my words in your mouth. See, I have set you this day over nations and over kingdoms, to pluck up and to break down, to destroy and to overthrow, to build and to plant,” God told the weeping prophet. Jeremiah was a reformer of the church, he called the people of God to purify their confession, he was set over nations and kingdoms to do God’s will. Brothers and sisters, we need prophets who weep for our cities, who call the people to repentance, who are reformers, who tear down and destroy, who build and plant.

We need a church planting movement to bring the Gospel, for the Kingdom of God is at hand. Christ will not leave us to wallow in our sins, but instead He gave Himself upon the cross, to die and then rise again, to give us forgiveness and eternal life. And now He calls upon us to a life under the cross as well. Not for personal glory, but like Jeremiah, to suffer, to sacrifice, to die to ourselves, in love for our neighbor – regardless of the cost. God indeed brought back the exiles after they were scattered and imprisoned by the nations, all of Israel wept for days when the book of the Law was opened to them which then turned to joy in forgiveness. And God in His mercy, when we turn back, will hear our prayers to rescue us in His Son. I myself was blessed enough to be sent to a location where there was a blank slate, to plant a distinctly Lutheran church, where we could build and we could plant through witness, mercy and our life together.

And the harvest is still plentiful, and the laborers are few. We need to pray for Isaiah’s and Jeremiah’s and St. Paul’s and St. Peter’s — those who will boldly scatter the seed. As long as there are cities that are on the path to destruction, we need planters who will preach repentance and forgiveness, to tear down and build up, to destroy and to give life. Make no mistake, we need movement — where we are all going in the same direction, we need initiative — to get us there, we need a tried and true process — that is faithful to what God calls us to. The hour is unknown, but we do know this, we have never been closer to Christ’s return, and we can do more than pray… so hear the Word of the Lord: “Behold, I have put my words in your mouth. See, I have set you this day over nations and over kingdoms, to pluck up and to break down, to destroy and to overthrow, to build and to plant.”

The Blessings of Interns: 5 reminders for congregations receiving a vicar or intern this summer