Uniform of the Day

I find it odd that, at a time in our culture in which most people honor those who wear uniforms in service to our society (e.g., military, law enforcement, first responders), many of us don’t value pastors who choose to wear the uniform of their service on a daily basis.

Having once worn a uniform in service to our nation, I understand the uniform of a pastor in a very complete way. Like a military uniform, the clerical collar identifies for other people the wearer’s role and responsibilities. But more than that, the uniform serves as a powerful reminder of that role and its responsibilities to the one who wears it. The uniform of a soldier or a policeman or a firefighter focuses the wearer on the significance and importance of the trust that has been extended to the one wearing it.

Wearing a clerical collar has often opened doors for me with people in public. (It may have closed doors too, but I doubt that it has closed any that weren’t going to be closed to me in any event.) I’ve been given entry into restricted areas of hospitals, invited into conversations in airports, asked for guidance or prayer from people disconnected from the Church, heard the confessions of strangers, and a host of other experiences simply because I was wearing the uniform of a pastor.

Each day I wear a clerical collar to my place of work even though it’s not a congregation. Serving at the Synod’s headquarters means I can wear whatever clothing I care to wear (within HR’s policies, of course). I choose to wear the uniform of a pastor. In part, I wear it because I understand it as a uniform and that it represents the office to which I’ve been called. I also wear it because it reminds me that I am a pastor serving God’s people in the work that I do.

Other pastors choose to wear different attire – some of which is much like the uniforms of business people, sports coaches, or retail workers. I don’t know what motivates them to wear these other uniforms, but I know what motivates me to wear what I consider the pastor’s “uniform of the day.” While I don’t understand it, I also don’t disparage it. After all, adiaphora (i.e., indifferent things) are adiaphora.

However, I find it interesting that when we want our pastors to make themselves publically recognizable we ask them to “put on their collars.” For example, last year during the unrest in Ferguson, MO local pastors were asked to wear clerical collars to a public event so that the pastors would be recognized and the Church’s presence realized.

Public awareness of the presence of pastors and the Church. Isn’t that what we need every day in our communities? Shouldn’t we be visibly present as a testimony that the Church is still an active and vital part of our society? Doesn’t the declining spiritual condition of America today call for pastors to stand up by, among other ways, standing out?

Like other uniforms, the pastor’s unique attire is a powerful symbol. As someone once put it, when a pastor wears a clerical collar in public he is proclaiming “God is open for business.” There are other ways to do this, but for me the simple, straightforward, and intentional wearing of a clerical collar provides a way to declare that “God is open for business” that has resulted in a multitude and variety of opportunities to speak of Jesus with people of all kinds.

With these opportunities in mind, I routinely and intentionally wear the pastor’s “uniform of the day.” 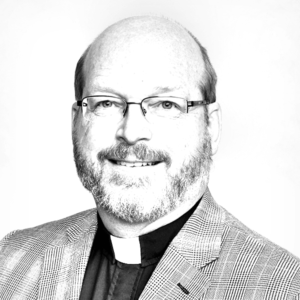 The Rev. Dr. Mark A. Wood serves as director of LCMS Witness & Outreach Ministry and as director of the LCMS Revitalization initiative. In his roles he identifies, develops and promotes resources for assisting congregations with inviting, welcoming, and receiving people who are disconnected from the church, equipping Lutherans to be more effective witnesses in their everyday lives, and, aiding congregations with revitalization.

MMT: After the Trip