The following article first appeared in the January-February 2015 issue of Lutherans Engage the World. Read the “Update” section below to learn about the work that has been completed to date.

In the extreme southern part of Madagascar, set against hot hillsides of prickly cactuses and Triangle palms, a tour guide in Andohahela National Park stops on the rocky path.

Here, he said, is where two different climates meet. To the west in the desert is the Androy region; to the east, the tropical Anosy region.

It’s also a place where two church bodies intersect as they seek altar and pulpit fellowship. The LCMS and the Malagasy Lutheran Church, known locally as the Fiangonana Loterana Malagasy (FLM), have embarked on a project to install tin roofs on FLM churches around the country. For this, the LCMS gave a $100,000 grant.

“We are so glad to have the support from the U.S. to realize the tin roof project,” said the Rev. Dr. David Rakotonirina, FLM bishop of the capital city of Antananarivo. “This project is just one way to show the relationship between the two church bodies.”

To see the first round of roofs, one needs to have an experienced driver, a durable four-wheel-drive truck and a strong stomach. Churches sit off roads cratered with potholes, far from towns and cellular service. Along the way, there is rarely a smooth surface.

Near the town of Antsovela, members of a congregation in a small stone church explain how they plan to use these pieces of tin to extend the building for a growing parish. After prayer, they give a visiting LCMS representative a highly respected gift of daily bread — a live goat — as a gesture of thanks.

Pastor Joroaze, president of the FLM district west of Antsovela, said the LCMS project has helped him witness in the community and build a sense of unity through the teamwork involved in roof construction.

“It has great impact because people are more willing to help and work and get the church done,” he said.

The project also has helped to change minds. By witnessing the LCMS’ help, Joroaze said residents have come to realize that the church serves the poor within the community. It isn’t the actual roofs that are important, but rather how the community responds to the project, he explained.

LCMS President Rev. Dr. Matthew C. Harrison and the Rev. Dr. Albert B. Collver III, LCMS director of Church Relations, first pursued the project in February 2014 after meeting with FLM bishops in Antsirabe, the staging area for LCMS Mercy Medical Teams in Madagascar. In all, the project will buy some 22,000 pieces of tin to cover 220 churches.

“The Malagasy Lutheran Church, although only 20 years younger than the LCMS, is a church body that the LCMS has only had contact with for about 15 years,” Collver said. “Both churches’ commitment to the Holy Scriptures and the Lutheran Confessions have drawn them closer together over the past decade.”

During this time, a number of FLM pastors have studied at the Synod’s two seminaries in the U.S. The LCMS also has worked with synods of the Malagasy church to carry out mercy projects like HIV awareness, hospital projects and Mercy Medical Team trips.

“The tin roof project is the largest project between the Malagasy Lutheran Church and the LCMS to date,” Collver continued. “It helps show concern for individual congregations. We hope that Christ will draw our churches closer in a common confession of faith.”

Rakotonirina is visibly excited when he discusses the tin roof project. “We are very thankful for having a relationship between the LCMS and the FLM.”

As the sun sets over the farming community of Amboasary, the community gathers to watch two men install tin roofing on the church. The elderly Falesoa Jean-Pierre hoists a piece of tin over a rickety handmade ladder and nails it into place. He stops for the evening — not because it’s getting dark, but because he runs out of nails.

Later, while observers overlook the cliff edges at the rough intersection of the Indian Ocean and the Mozambique Channel, clouds begin to shroud the sky, obscuring the pale landscape of rocks and shrubby plants.

The words “Thy Kingdom come” come to mind. And on this intersection, an LCMS representative and an FLM bishop shake hands. Where two bodies of water meet, so do two cultures, walking onward together. “Thy will be done.” 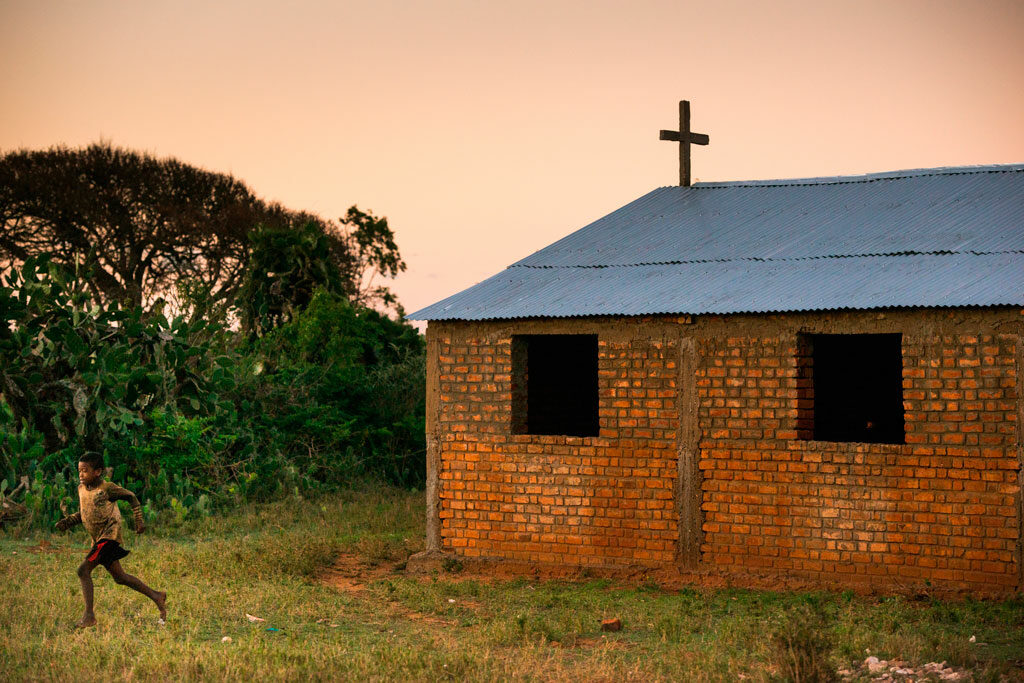 Thousands of Lutherans in Madagascar are now able to worship in their churches come rain or shine thanks to the $100,000 grant given by the LCMS in late 2014.

During the past year, grant money was disbursed to congregations from all 17 synods, or districts, of the Malagasy Lutheran Church to replace their leaky roofs with sturdy corrugated tin. This assistance has enabled members to gather for worship and meetings year-round — even during the rainy season.

“We have learned that a project such as replacing the roofing of churches that appears to be very simple has a lot of impact in the lives of the church members,” said Rakotonirina.

But the Synod’s provision of tin for roofs doesn’t end with Madagascar. The Tin Roofs for Africa project continues to impact Lutherans in Tanzania, Ethiopia and all around the continent.

While some churches — like those in Madagascar — replace existing thatch roofs, many of the grants go to new church buildings, which are being built by the members’ own hands from mud, sticks and clay bricks.

“Tin roofs are not just about providing a shelter under which you can worship in the rainy seasons. They are not just about keeping the sun off your head for the three- to five-hour worship service,” said the Rev. Shauen Trump, LCMS area director for Eastern and Southern Africa. “The tin roofs are fundamental to preserving a building itself to keep the rain from literally melting the walls.

“The church is expanding, the Gospel is going forth, congregations are being planted, and we get to be a part of it all,” Trump continued. “Praise God!”