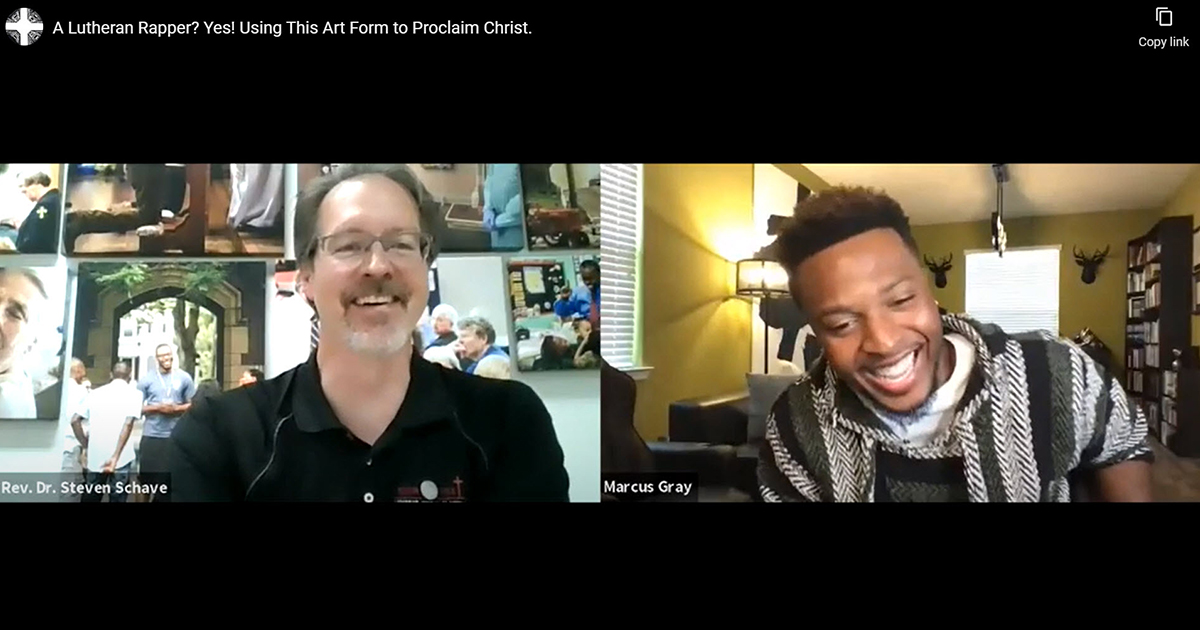 The webinar featured the Rev. Dr. Steven D. Schave, director of UICM, interviewing Marcus Gray, a Lutheran recording artist who goes professionally by the name Flame. At this writing, the webinar has received over 900 views, by far the most ever for a UICM webinar.

Asked why he decided to interview Flame, who composes and performs Christian hip-hop (rap) music, Schave said, “Our webinars are meant to be tools to equip urban and inner-city ministries for outreach and witness. Hip-hop is the most popular form of music right now, especially in our cities, and Flame is the first artist that I know of to use this genre with lyrics that are distinctly Lutheran. Artists like him present an opportunity to reach youth in our cities, who might not be in the church, with the Gospel.”

Flame, a native of St. Louis, earned a bachelor’s degree in biblical counseling from Boyce College, Louisville, Ky., in 2010, and a master’s degree in theology from Concordia Seminary, St. Louis, in 2018. He comes from a Baptist/Reformed background but became Lutheran in 2019. He has been a guest on KFUO’s “The Coffee Hour” and Lutheran Public Radio’s “Issues, Etc.” In the last 10 years, Flame has released nine albums, been nominated for several Grammy and Dove awards and in 2019 won a Stellar music award for Rap/Hip-Hop Gospel CD of the Year.

In a 2020 article for the Issues, Etc. Journal, Flame wrote about his journey to Lutheranism:

“Through a series of events and what seemed like a fluke, I found Concordia Seminary in my hometown. Although I knew it was a Lutheran school, I thought Luther and John Calvin were lockstep on all things. After I enrolled and tested into the school’s graduate program, I began to notice [differences]. Wait, did the professor just say, ‘Here’s where John Calvin got it wrong’? I was both taken aback and curious.”

Flame wrote that it was the Lutheran understanding of justification that “nurtured me back to the purity of Paul’s teaching and into the comforting arms of our Lord Jesus Himself. If faith is a gift that God alone grants, and we as believers simply receive His promises, then I wanted that. I needed it. I was no longer steered toward my spiritual growth for assurance of my salvation. Obedience, which naturally flows from the faith God created in my heart, was for the benefit of those around me. It was not to prove I was saved.”

Flame says that he understands the hesitation some may have about Christian rap, given the negative content of much mainstream rap. Yet he believes the genre’s emphasis on text and its use of rhythm, cadence and rhyme make it well-suited to teaching Scripture, doctrine and church history in a way that can be easily learned and later recalled. The best use of Christian rap, he said, is not in corporate worship but as a tool for study, reflection and enjoyment the rest of the week.

Several of Flame’s songs mention his teachers at CSL. The song “Used to Think” opens with a shout-out to the Rev. Dr. Joel Biermann, professor of systematic theology at CSL. Biermann remembers Gray as a “very engaged, but very quiet guy who sat in the front row and took copious notes. … It was actually quite a surprise to me when a student in one of my classes … alerted me to the shout-out from Marcus on his EP [extended play album], ‘Extra Nos.’

“Listening to it was a delight — it was like hearing my lectures being voiced directly back at me but in a very different genre. Some of the lines are verbatim phrases I use in the classroom. Now when I need to make a case for the relevance and importance of systematic theology for ‘real life,’ I can simply reference Marcus. It’s quite compelling evidence that orthodox Lutheran doctrine resonates with people simply because it speaks truth.”

Flame belongs to an LCMS church in Tampa, the city he now calls home. He said that on Sunday morning he is not Flame, the recording artist, but Marcus, the church member. “I am truly grateful for my church,” he said. “There’s so much love and respect there. The pastor and the congregants make me feel comfortable simply being myself. It keeps me grounded and focused on God’s priorities, His assurance of salvation and my vocation.”

“Extra Nos” explores Flame’s time at the seminary and his embracing of Lutheranism. Its follow-up, “Christ for You,” focuses on Holy Communion.

Read about Flame’s journey to Lutheranism.

Listen to Flame on KFUO’s “The Coffee Hour.”