In an effort to put an end to human trafficking, the LCMS is teaming up with Lutheran Immigration and Refugee Service (LIRS), Baltimore, to provide educational programs, Bible studies and opportunities for LCMS congregations and individuals to take prayerful action against this growing problem. 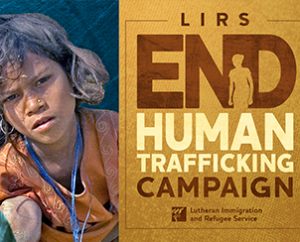 Today more than 27 million people around the world are ensnared in human trafficking, with 17,500 of those trafficked into the United States. These victims are subjected to inhumane treatment including sexual slavery, forced labor and other forms of exploitation.

Resolution 6-07A — adopted 1,047-to-19 by delegates to the 2010 LCMS Convention — was titled, “To Support Efforts to End Human Trafficking/Slavery.” It brought to light the need for Lutherans to show mercy to vulnerable migrants and refugees, develop educational materials on human trafficking and create awareness about this form of modern-day slavery.

“This is the critical moment for Lutherans to get involved to end human trafficking, because Americans are waking up to the damage this crime inflicts on young people, their families and our communities,” said LIRS President and CEO Linda Hartke. “We have a moral imperative to seize that opportunity and add our voices to those of our neighbors and members of our congregations, creating a movement that protects and helps to heal the survivors of this crime.”

“End Human Trafficking Now” is the educational campaign of LIRS, conducted in partnership with the LCMS. While one of the main goals of the initiative is to create awareness among LCMS members about human trafficking, the focus is on proactive response and tangible forms of mercy and action on the part of both pastors and laypeople in the LCMS.

“Being pro-life involves doing,” said the Rev. Bart Day, executive director of the LCMS Office of National Mission. “As a pro-life church, the LCMS has an opportunity to show the world that we are more than anti-abortion, but we defend and support all life. Human trafficking is an attack on human life — life created by God for a holy purpose — so we must be concerned about and become engaged in ending this practice that takes the most vulnerable and sells them as a commodity for unholy purposes. As the newly created materials on human trafficking arrive at congregations, it is my prayer that people will learn about the issue and get involved.”

Day noted that to that end, “Resolved: A Bible Study on Ending Human Trafficking,” was created by LIRS to guide LCMS participants through the scriptural and theological bases for standing up against slavery and to help them choose some form of faithful action that will make a difference in the fight against human trafficking. The study, which includes a leaders guide complete with facilitation helps, is designed to be presented in about one hour and is available here.

Congregational and individual support of the LCMS efforts is through the Office of National Mission, which provides ongoing funding, resources, advocacy and education to and through LIRS.

Day continued that the LCMS is doing more together to stop the exploitation and sale of children and adults than individuals could do alone.

Working with local partners around the country, in many cases Lutheran Social Services and other LCMS Recognized Service Organizations, LIRS is the conduit through which God’s mercy is shown to “the least of these” on behalf of the Church.

For more information about LIRS and the joint educational initiative with the LCMS, click here.

To download the new LCMS Commission on Theology and Church Relations report titled “Immigrants Among Us,” which offers theological guidance from a Lutheran perspective for thinking through and addressing immigration issues, visit lcms.org/?pid=675.

Jeni Miller is a freelance writer and a member of Trinity Lutheran Church, Cedar Rapids, Iowa.