Lutherans across the United States will come together April 22-25 to “Orange Out Malaria!” as part of the Lutheran Malaria Initiative (LMI), ending the week with “LMI Sunday” on April 27. 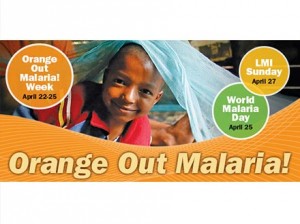 The special week coincides with “World Malaria Day” on April 25, which is observed worldwide.

One child in Africa dies every 66.5 seconds from malaria. In a single 24-hour period — one day — nearly 1,300 children in Africa will succumb to this preventable disease.

Orange Out Malaria! is intended to increase awareness about malaria’s impact and raise funds to fight the disease with LMI. Taking LMI’s signature color as its theme, Orange Out Malaria! provides activities and resources to congregations, schools and individuals to make participation easy and fun.

Some resources provided for Orange Out Malaria! week include:

“Every day families across Africa are suffering the devastating loss of a child from a disease that is completely preventable and treatable, but we have the ability to change that!” said Martha Mitkos, director of LMI for the LCMS. “LMI — through programs focused on education, the prevention and treatment of malaria — is part of the global fight to end malaria deaths in sub-Saharan Africa. We are seeing progress.

“In just three years time, the number of children dying from malaria has been cut by more than half! We have a reason to celebrate and a reason to continue the fight! We are called by Christ to show mercy and end this suffering.”

Working through churches and other partners in Africa, LMI educates people at risk of malaria about how to prevent infection, how to recognize the symptoms and what to do if they get sick. One of the easiest ways to prevent malaria is to sleep under a bed net, which can be provided through LMI for $10.

LMI is a partnership of The Lutheran Church—Missouri Synod and Lutheran World Relief, Baltimore, to mobilize U.S. Lutherans in the global effort to eliminate malaria deaths in Africa. LMI has been made possible through support from the United Nations Foundation.

CUS think tank provides ‘whole lot to think about’