An update on resolutions adopted at the 2013 Synod convention is now available for delegates and others. The 2013 Convention Resolution Update — September 2015 follows the format of the last similar report, which was released in 2014. 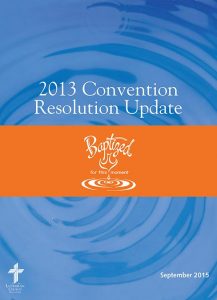 Synod President Rev. Dr. Matthew C. Harrison calls attention to two items in his introductory letter with the update, writing, “Please take note of the report on the Licensed Lay Deacon Task Force. … I believe we have the way forward to solve the challenges while both being faithful to our public confession and making sure there is a way to keep these men serving as pastors in special and challenging circumstances.”

Harrison also notes that special attention was given to “drawing a clear line should a church worker aggressively and publicly reject the Synod’s clear biblical teaching on very significant matters” and announces that he has “appointed a group that includes the Secretary of the Synod Ray Hartwig and others from both the Commission on Handbook and the Commission on Constitutional Matters to suggest revisions to our current system for dealing with such cases.”

The update — as well as the Licensed Lay Deacon Task Force report — may be downloaded at lcms.org/convention.