It is one day particularly worth celebrating, but it also doesn’t garner decorations or turkeys, a day off work or a special stamp from the post office. It’s Jan. 16: Religious Freedom Day. 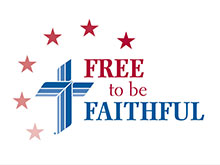 In 1786, Thomas Jefferson wrote the “Virginia Statute for Religious Freedom,” which included the following commentary about the importance of religious liberty and the protection of it, specifically afforded by the First Amendment:

No man shall be compelled to frequent or support any religious worship, place, or ministry whatsoever, nor shall be enforced, restrained, molested, or burthened in his body or goods, nor shall otherwise suffer on account of his religious opinions or belief; but that all men shall be free to profess, and by argument to maintain, their opinion in matters of religion, and that the same shall in no wise diminish, enlarge, or affect their civil capacities.

The Lutheran Church—Missouri Synod prizes that freedom still today, and its “Free to be Faithful” education and awareness campaign was launched in 2012 in an effort to protect freedom of religion as well as assist Christians in responding articulately and faithfully to increasing intrusions by the government in the realm of the church.

In light of this year’s nod to Religious Freedom Day, the following resources are available for free download at lcms.org/freetobefaithful:

Also visit lcms.org/freetobefaithful for a variety of other resources available for congregational, home and school use.

Adriane Heins (adriane.heins@lcms.org) is managing editor of The Lutheran Witness.