LCMS District and Congregational Services (DCS)–Youth Ministry has announced that plans are now firm to hold the 2007 National LCMS Youth Gathering in Orlando, Fla., instead of in New Orleans.  The Gathering is set for July 28-Aug. 1.

Youth Ministry announced at the 2004 Gathering in Orlando that New Orleans had been selected to host the 2007 Gathering, but began reconsidering that choic 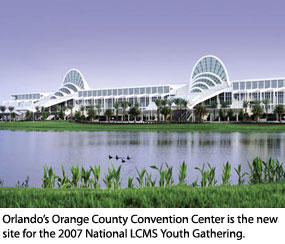 “With less than 21 months until the 2007 event,” Gathering Communications Director Gretchen Jameson said, “the Youth Ministry Office and the National LCMS Youth Gathering, with unanimous approval from the Executive Committee of the Board for District and Congregational Services, will heed the recommendation from The Lutheran Church–Missouri Synod’s Risk Management and Insurance Office that ‘without a critical path/timeline established as to when it is estimated that New Orleans could be rebuilt to accommodate the 35,000+ individuals in 2007, coupled with [the] need to continue [the] planning process, it is recommended that an optional city be selected for the 2007 Gathering.’ ”

Jameson noted that post-Katrina deliberations on the site for the next national Gathering included the DCS, the New Orleans Convention and Visitors Bureau, authorities of that city’s Morial Convention Center, the LCMS Travel and Meeting Office, and LCMS Risk Management.

She said that an Oct. 3 meeting with officials “revealed the reality of insuring the five-day youth event in New Orleans to allow for the integrity of the event’s programs to be realized would be extremely difficult.”

Youth Ministry delayed from Oct. 7 until at least today (Oct. 12) its plan to announce a final Gathering site after Louisiana Lieutenant Governor Mitch Landrieu requested that the city be given more time to demonstrate its viability to accommodate the Gathering.  Jameson said that on Oct. 11, New Orleans representatives asked the Gathering to delay for another 60-90 days before making any decision.

“Given the nature of the Gathering,” said Rev. Terry Dittmer, director of LCMS Youth Ministry, which sponsors the national Gatherings, “time is not something we have in great supply.”

“The reality we face.” Dittmer said, “is that the Gathering requires 500,000 square feet of convention space, a venue for 35,000 participants for [mass] events, 14,000 hotel rooms within walking distance or a 15-minute shuttle ride, and food options in a price range and of a volume to feed a crowd of teenagers.  With less than two years to plan, we simply cannot wait to find a city and expect to book a location at a reasonable price.”

Of seven cities considered for the 2007 Gathering after Hurricane Katrina, including New Orleans, only Orlando had the necessary dates, hotel, and convention space available at an “impressively affordable” cost, according to Jameson.  Orlando was the site of the Synod’s most recent national Gathering, in 2004.

“The rationale to move to Orlando,” Jameson said, “was endorsed by the Gathering Executive Council at an emergency meeting held in St. Louis on Oct. 4, 2005. Members of the Gathering Executive Council included individuals also serving the LCMS Southern District Relief Office and [LCMS] New Orleans natives. The executive committee of the DCS expressed unanimous approval for the move to Orlando; similar endorsement for New Orleans was not expressed.”

Gene Menzel, executive assistant for Parish Services for the LCMS Southern District, which includes New Orleans, sent an e-mail to Dittmer that said, “I accept that the [Youth Ministry Office] and planners must make some major decisions and get things in place to be ready for 2007.  We do not feel that we are being abandoned as I am certain that … the 2007 Gathering will still have a flavor of New Orleans no matter where it will be held.”

Dittmer called the choice to leave New Orleans “an emotionally difficult decision to make.  It has been a vibrant place for the Gathering, [and] its people and leaders have been generous to our youth.  The reality of having to make this move is not one we take lightly.”

The move from New Orleans “cannot be interpreted as fleeing to find comfort and ease for participants or the program,” said Mark Kiessling, a DCS–Youth Ministry staff member and program director for the 2007 Gathering. “If we were able to guarantee the safety of teens in the city and the Gathering’s ability to program boldly given the circumstances within the city, we would do so.  At this

`Point of Truth` episodes to focus on `Ablaze!`