Seeing so many young people “with the same focus” — mission — was a highlight for Dwight Dickinson, one of more than 150 college students who attended the Beautiful Feet Mission Conference Nov. 3-6 in Austin, Texas.

Dickinson, a first-timer, attended the 8th annual conference because others at his school — Concordia College in Selma, Ala. — told him about their experi 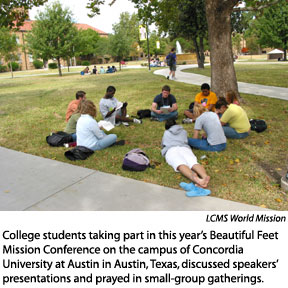 ences and encouraged him to go.  As a result of his participation at this year’s conference, Dickinson says he is “really interested to use what I learned, especially in involvement and outreach to youth and in communities  maybe even back home in St. Louis.”

With the theme “From Cowboys to Cityslickers: Breaking Stereotypes,” the conference was planned by a committee that included Lutheran students from three Texas universities: Concordia University at Austin, which hosted the gathering; the University of Texas at Austin; and Texas A&M University, College Station.

“We learned that God truly answers prayers,” said committee Chairwoman Kayla Cowan, a senior in Concordia-Austin’s director of Christian education (DCE) program.  “We were so thankful and appreciative of the support we received from congregations as we planned this conference.”

More than 25 congregations — in Austin and around the country — provided prayer and financial support, Cowan said.  “It showed to us that our Synod does care what is going on with us, and that congregations want to support those interested and involved in missions.”

A highlight for Cowan was hearing responses students brought back from those excursions.  “Some of the 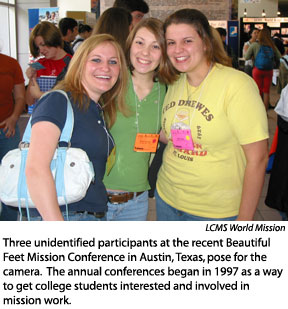 students got to share their faith with people,” she said.  “And they were able to immediately use some of what they had been learning at the conference.”

Kimberly and Brittany Closner and Karla Grill — students at Concordia University, Portland, Ore. — agreed.  “We really liked the morning excursion at Mission Possible Austin,” said Brittany Closner.  “We learned of their community ministry [with low-income families], were able to play with the kids they serve, and even had time talking with the kids one-on-one.”

All three students said they are interested in mission because of their previous experiences serving in Mexico.

Closner, a DCE student, said her short-term mission trip to Ysleta Lutheran Mission in El Paso, Texas, “is what led me to decide to go into ministry as a director of Christian education.”

The annual conferences began in 1997 as a way to get college students interested and involved in mission work.  Organized and led by Synod college students at different sites each year, the events feature missionaries who talk about their work and visits to nearby mission sites.  The event receives funding from LCMS World Mission.

For more information about next year’s conference, contact LCMS World Mission at (800) 433-3954 or mission.info@lcms.org.

Stacey Welcenbach is a writer for LCMS World Mission.

LHM to sponsor float in Tournament of Roses Parade