A Code of Ethics was unanimously approved and adopted by the Concordia Deaconess Conference (CDC) during the group’s May 16-18 meeting at Concordia University, River Forest, Ill.

The document, three years in the making, was developed by the CDC to guide deaconesses in their service to the Synod and to provide the Synod with a clear understanding of the work of deaconesses.  The Code of Ethics describes the mission of the CDC and “outlines members’ responsibilities and obligations to God, to the church, to colleagues, and to each individual who is to be served.”

The meeting also celebrated the 25th anniversary of the CDC and the birth of the deaconess training program at Concordia, River Forest, and included 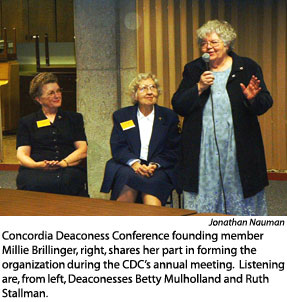 a presentation on the history of the CDC by the organization’s founding members and Dr. Paul A. Zimmerman, who was president of the university when the deaconess program was started.

Theme of the meeting was “Working in Faith, Laboring in Love, Remaining Steadfast in Hope.”

Other speakers included Dr. Lawrence Rast, associate professor of historical theology and assistant academic dean at Concordia Theological Seminary, Fort Wayne, who examined the history of Lutheran deaconesses in the United States and in The Lutheran Church–Missouri Synod; Rev. Matthew Harrison, executive director of LCMS World Relief/Human Care, who addressed the need for deaconesses to serve in human-care agencies; and Dr. Beverly Yahnke, director of Christian Counseling Services of Milwaukee, whose topic was “Prescriptions for the Woman’s Soul.”

Deaconess Joyce Ostermann of Fort Wayne received the CDC’s Phoebe Award, which is given to a deaconess whose ministry exemplifies service to others and who has contributed to and strengthened the deaconess ministry.  The award is named for the Phoebe of Rom. 16:1, whom Paul calls a deaconess and “helper of many.”

Yahnke received the Zimmerman Award, which is given to someone who is not a deaconess but who has demonstrated support for and commitment to the CDC.  The award is named for Dr. Paul A. Zimmerman, who helped establish and guide the deaconess training program at Concordia, River Forest.

The Phoebe and Zimmerman awards are presented by the CDC every five years.

Also during the meeting, Deaconess Kristin Wassilak of Forest Park, Ill., was honored and thanked for her 15 years of service as director of the deaconess training program at Concordia, River Forest.  A new director has not yet been named.