KNOXVILLE, Tenn. — The low numbers got them here April 29-30 — leaders of 18 Synod congregations who said that factors such as effective Word and Sacrament ministry, active lay involvement, and community outreach helped their congregations achieve those numbers.

In each of their cases, those low numbers are a low ratio — for the number of confirmed adult members per each new 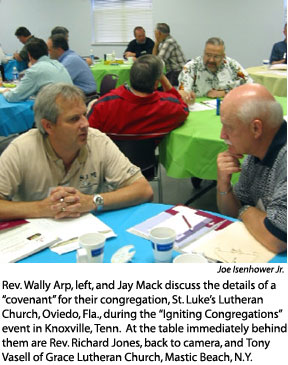 adult confirmand who joined their congregation in a recent five-year period.

“For them, it’s actually a barometer for seeing God at work in their congregations,” said Rev. Larry Krueger of LCMS President Gerald Kieschnick’s office, which invited congregations to eight “One Mission Ablaze: Igniting Congregations” events over the last year and a half.  This was the seventh of those events.

Kieschnick challenged the group at Knoxville’s Grace Lutheran Church to “set God-sized goals, mentor and encourage others to set similar goals, and come up with a way to be of the greatest assistance to the greatest number of people possible.”

The project, funded by a $40,000 grant from Thrivent Financial for Lutherans, gives each of the 18 congregations at this “Igniting” event $1,000 to help it meet its goals for increasing the number of adult confirmands and uses the remaining $22,000 to enable the group to reconvene for a follow-up event in a year, along with representatives of other congregations.

A committee of the leaders at this event will iron out details for the project, which might also involve students from the Synod’s two seminaries.

“These seven events have been hugely encouraging,” Kieschnick told the group here.  “I have a sense that the LCMS has so many people who want this church body to be all that it can be to focus our energy on having as many people as possible spend eternity in Heaven.”

“Essentially, lots of energy, life, planning, and daring are required to take risks for the sake of the Gospel,” Kieschnick said.  “We’ll help you with anything and everything that the office of the president can do … to permit your ministry to be anchored, creative, free from obstacles and barriers.  This is what we’re committed to doing for the sake of the Gospel.”

In a question-and-answer session, Kieschnick defined congregational leadership in terms of these six qualities:

Representatives at this event shared with Reporter what their congregations are doing to increase outreach.

Tony Vasell, an elder at Grace Lutheran Church, Mastic Beach (Long Island), N.Y., said the congregation in the largely “blue-collar” community 60 miles from Manhattan has “grown due to friends and family personally inviting others to church,” an effort that “had been extended and faithfully nurtured for many years.”

“There seems to be a strong desire for the Word of God as well as a sense of community and fellowship among our new folks,” Vasell said.

He said that Grace’s pastor, Rev. Richard Jones, who was also at the event, “has ensured that we have a safe and nurturing environment for all ages, he teaches … based on Scripture, and he applies Law and Gospel with great wisdom, teaching various lay leaders to do the same.”

“We are also not afraid to help and reach out in our community,” Vassell said.

He told Reporter in late May that he and Jones had already shared with the congregation their covenant goal of 575 new adult confirmations over the next five years.

“We told them that this is a goal in which the Holy Spirit would have to be the author,” Vassell added.

Dr. Mike Ramey, pastor of Family of Faith Lutheran Church, Houston, said that while the congregation “has a lot of ministry activity in comparison to most of the congregations of the LCMS, the overall factor [for its low members-to-converts ratio] that seems to be readily identified is in the area of developing relationships.”

“Additionally,” Ramey said, “every member is seen as an evangelist, and loving outreach is stressed among greeters, ushers, Sunday-school teachers, and general membership.  All members are expected to be inviting members; all members are encouraged to be welcoming members.”

Ramey said the congregation is planning to hold an “Igniting Congregations” event of its own in August, “inviting area congregations to examine the data, hear more about the Synod’s Ablaze!  initiative and consider mission-and-ministry endeavors for themselves and the entire Houston area.”

Ramey added that congregations gathered for that event interested in forming a partnership would start coming together again in September for a series of monthly meetings “to examine the various ways each congregation can work toward the goal of increasing adult confirmations.”

“Most of what was discussed in Knoxville is simple,” Ramey said.  “It’s not brain surgery…. The simple fact is that healthy congregations grow.  They grow out of a natural desire to share and pass on what they have by their relationship with the Lord and relationships with their fellow members.  Simply sharing ideas that work in the different congregations of Synod is a good starting point.”