With the theme “Enlarge the Harvest,” the 88th annual international convention of the International Lutheran Laymen’s League brought more than 1,000 people to Topeka, Kan., to focus on training leaders and “activating” laypeople for 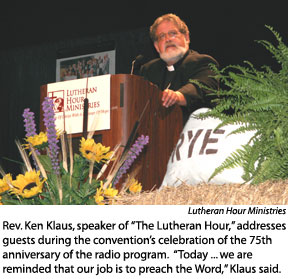 ministry, kick off the yearlong 75th anniversary celebration of “The Lutheran Hour” radio program, worship with and hear reports from Int’l LLL leaders, and take part in business sessions.

In the opening session of the July 28-30 event, Int’l LLL President Jack Kidwell encouraged convention-goers to take seriously the challenge of leadership development.

“Our leaders need to instill lay activity and leadership characteristics in people from their earliest involvement in volunteerism throughout their active lives,” said Kidwell.  He reported that the auxiliary’s Lay Activation Committee is “making early progress” but added that “the challenge is significant because building renewed activation does not happen quickly.”

The convention included training sessions that focused on developing leaders and empowering laity.

Addressing some 900 people at a convention fellowship luncheon was Tim Goeglein, special assistant to President George W. Bush and deputy director of the White House Office of Public Liaison.  Goeglein, a Missouri Synod Lutheran, brought greetings from President Bush and Laura Bush, and said he and the President regularly share their faith with  each other.

The President asked him “to tell you how much he appreciates your prayers,” Goeglein said.

Global terrorism is America’s greatest challenge, said Goeglein.  “It’s been said that we are the last great hope of this world, and that’s because we serve a remarkable God,” he said.

The convention wrapped up with two events celebrating the mission of Lutheran Hour Ministries:

“The Lutheran Hour has a mission, a mission to bring the Good News of our Lord Jesus Christ in a language people can understand,” said Hoffmann, who served as the voice of the half-hour weekly program for 33 years.  “I didn’t do anything special.  I just told the Good News.  I’m still willing to do that.  I look back with great thanksgiving — for myself and for all of the other people who benefitted from the Good News of the Gospel.”

Klaus promised that “The Lutheran Hour” message “will not change.”

“And when my voice is silent, another will take my place and he will continue to say, ‘We are Lutheran Hour Ministries, and we preach a changeless Christ to a changing world,'” Klaus said.  “‘We are the Lutheran Laymen’s League, and we bring Christ to the nations.  This is “The Lutheran Hour,” and we proclaim God’s own truth: Christ is risen!  He is risen, indeed!'”

Unable to attend the event but sharing their memories and good wishes via video were LCMS President Gerald Kieschnick; former speaker of “The Lutheran Hour” Dr. Dale A. Meyer, now president of Concordia Seminary, St. Louis; and Dr. Paul Maier, son of speaker Walter A. Maier.

Next year’s convention is planned for July 6-9 in Billings, Mont.