Rethinasamy, who serves South Asians, mostly from India, posed an eager question to Dr. Sang Choi, who works among Koreans in Irvine, Calif., including 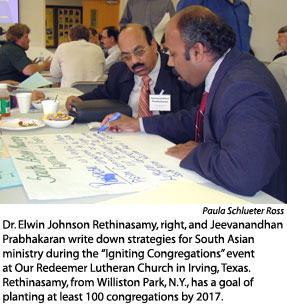 students at Concordia University there.

“I am very interested to know — are there any Indians at that school?” Rethinasamy asked.

By the end of that conversation on the first day of the conference, the two pastors had exchanged business cards and pledged to work together to reach Asian Indians in Southern California.

Unlike the previous “Igniting” gatherings, which brought together leaders of similar ministries, this one was “unique” because of the wide variety of ministries represented, according to Synod President Gerald B. Kieschnick.

Acknowledging the diversity of cultures at the conference, Kieschnick shared his hope that more Synod congregations would someday look “just like this group.”

Like its “Igniting” predecessors, the Irving event had a threefold purpose for attendees, who were encouraged to:

The events were planned by Kieschnick’s office in an effort to reverse the Synod’s 30-year decline in membership. 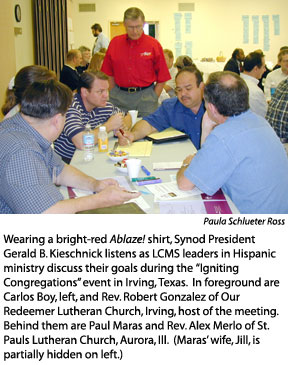 They also gave the president opportunities to talk about Ablaze!, the worldwide initiative by the Synod and its partner churches to reach 100 million people with the Gospel by 2017, and to share his own “One Mission, One Message, One People” vision for the Synod.

With 150 million unchurched people in this country — and an Ablaze! goal to start 2,000 North American congregations over the next 12 years — LCMS congregations are being called “to do much more than put out a welcome sign,” Kieschnick said.  He encouraged conference attendees to “get out of your comfort zones and find a way” to reach others with the Gospel.

Lutherans need to share their faith with others — what Kieschnick calls the “critical event” — “over and over and over again,” he said, and he described his own faith-sharing efforts.

Dining in a restaurant, for example, Kieschnick said he will sometimes tell the server, “We are getting ready to pray.  Is there anything you want us to pray for?”  One St. Louis-area waitress responded by saying she was looking for a new “church home,” so Kieschnick invited her to worship at his own congregation, Concordia Lutheran Church in Kirkwood, Mo.

Kieschnick urged conference attendees to make outreach a priority “not for the sake of The Lutheran Church–Missouri Synod [but] for the sake of the people whose lives depend on it.”

Rethinasamy, pastor of St. John Lutheran Church, Williston Park, N.Y., said his South Asian ministry has a goal of planting “a minimum of 100 congregations by 2017,” and at least 25 “around the world” within the next five years.

He hopes to meet that goal by “finding the possibilities, raising leaders, mentoring them, connecting them with their … districts, and letting them go.”

Jeevanandhan Prabhakaran, a lay leader who accompanied Rethinasamy to the Irving event, led a “house church” in Saudi Arabia for 10 years.  That indicated to Rethinasamy that Prabhakaran “was the right man” to help him in his ministry: “If he is for the Lord in a secret country, he can do better in a free country,” he explained.

“God connects people for relationships” in ministry, said Prabhakaran.  The lay leader said he plans to begin studies this fall at the Synod’s Ethnic Immigrant Institute of Theology, at Concordia Seminary, St. Louis.

Rethinasamy has started South Asian ministries at numerous sites on the East Coast, and is working to start Lutheran congregations among Asians in London and in India.

His ministry is “beyond borders,” he says.

During the conference, participants shared what they considered effective outreach strategies, including:

“The pastor can’t do it — the people need to do it,” said Rev. Michael Johnson Sr., pastor of Cross of Calvary Lutheran Church in Memphis.

Participants also planned how they will enhance their ministries.

Rev. Mark Griffin, pastor of Berea Lutheran Church in Detroit, an African American congregation, said his goal is to increase Sunday-school attendance from the current 1 percent to at least 50 percent of the church’s membership.

“We’re going to develop some Bible studies that are interesting to particular groups — like women, or men, or youth — topical Bible studies.”

Griffin said he considered the “Igniting” event “encouraging” because of the opportunities it provided to “talk with some of our brothers and sisters about their struggles and concerns, and get encouragement from them and ideas on things that might or might not work.”

Rev. Greg Fairow, who serves a campus ministry at the University of Wisconsin, Madison, said the event pushed him and Ted Harks, the lay leader who accompanied him, to set a far-reaching goal.

“When we went outside and prayed about what we thought was an attainable goal over the next five years, we came up with 5,000 ‘critical events.’  We looked at that and said, ‘This goal seems realistic to us, but isn’t God capable of doing much more through us?’  So we doubled it.”

To work toward that goal, Fairow plans to start with three to four small-group ministries led by college students and other young adults.

“As a campus ministry  one of our responsibilities and privileges is being able to train church leaders,” he said.  “So if we can train them at the campus-ministry level, they can go out into the community [to share their faith] for years afterward.”