No members of the Evangelical Lutheran Church of England (ELCE) lost their lives in terrorist bombings of three London subways and a bus on July 7.  Yet, with their fellow citizens, they remain shaken and troubled by the events that killed 56 people and injured hundreds.

“The lives of some members were, of course, disrupted, and at the very least many of us suffered anxieties over loved ones,” wrote Rev. Reginald Quirk, ELCE chairman, in an e-mail response to an inquiry from Reporter.  “There remains, of course, a legacy of unease tha 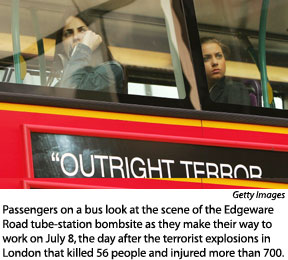 t something similar could happen again, and responding to this is probably the biggest aspect of our ministry as a result of the outrage.”

The ELCE chairman thanked the Synod for its interest and concern.  “I have received many messages of prayer and support from the USA and from the LCMS as a whole through its president,” he said.  “We appreciate this very much.”

The ELCE is one of some 30 confessional Lutheran church bodies worldwide in fellowship with the Missouri Synod.

In a letter sent July 8 to Quirk, LCMS President Gerald B. Kieschnick said: “In the midst of such turbulent and uncertain times, we may never fully understand the reasons for such violent acts upon innocent people or be able to answer every question raised.  But we do know the God of hope, who in Christ Jesus alone brings peace the world cannot give and offers hope that is eternal through His own death and resurrection.”

In an e-mail response to Reporter questions, Rev. Claudio Flor, pastor of Luther Tyndale Memorial Lutheran Church in London, said his church was full for worship services on the Sunday following the bombings.  Members, many of whom depend on public transportation, came despite potential risks to their safety.

In the days following the Sunday worship, according to Flor, “The theological questions started popping up.  I have spent several hours on the telephone, comforting, reassuring and encouraging people to rely on God’s providence and lordship.  I have given my ears and prayed publicly and privately with many members and friends of the congregation.”

Describing emergency services as “brilliant,” Flor said his congregation was ready to provide extra care and support in coordination with local churches, but it was not necessary.

When asked about prayer requests, Flor asked for prayers that God would heal the injured, that He would comfort the bereaved, that He would protect every nation from terrorist attacks, and that He would give eyes to those involved in violent activities to realize that destruction only causes more destruction, and that only Christ’s love can build bridges of understanding between people.

Paul Hill, a member of Christ Church in Petts Wood in Kent, is foreign desk manager of The Daily Telegraph and watched the day’s events evolve around him.

“First reports of ‘power surges’ were quickly discounted as the damage and picture became clearer.  All reporters available — and even some who weren’t — were dispatched to the center of London, to the heart of the carnage,” he wrote in an e-mail from the ELCE.  “The copy poured in on the injuries, the dead, the trapped and stranded commuters, the frustration of families of the victims and the collapse of the mobile telephone networks.”

Rumors also spread that The Daily Telegraph, located in the tallest tower in the United Kingdom, was being attacked by a suicide bomber.  Hill said the staff ignored that threat — which proved to be false — and carried on.

One thing that struck Hill, who has reported on violent attacks “well into triple figures” in his 34 years at the Telegraph, was the calmness of Londoners compared with citizens of some cities overseas, where panic and excitement often overshadow the attack itself.

“Is there time for prayer among all this?” he wrote.  “Often no, if one is honest.  The adrenaline is surging, the workload is enormous, but here always comes a pause, or even a cessation, which is when one may focus on the people who are actually involved and ask for God’s help and succor for those who are injured and are in fear and pain.

“Pause, say a prayer — or three — and move on,” he continued.  “There will be more trouble, more pain, but that will be tempered by love and hope.  We can all supply the latter.”