“The unprecedented outpouring of Christian love and generosity of our people is phenomenal,” said Rev. Matthew Harrison, executive director of LCMS World Relief/ Human Care, as he summed up the Synod’s response to Hurricane Katrina.

“Congregations and groups all over the Synod — many of them in the area slammed by this massive storm, pastors and other church workers, the auxiliaries, organizations, volunteers in untold numbers — have stepped up to the plate to help in whatever ways they can,” he said. 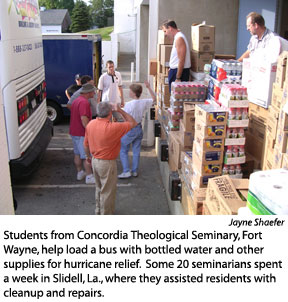 Harrison said that by press time for this issue, financial gifts for hurricane relief through World Relief/Human Care since Hurricane Katrina stood at just under $7 million — an amount surpassing gifts for tsunami relief in the same amount of time earlier this year, which itself was a record.

Those hurricane-relief gifts do not include matching funds from Thrivent Financial for Lutherans, which pledged $1 for every $2 its members in the LCMS and two other Lutheran church bodies give for hurricane relief, up to a $300 match and a total of $2 million in Thrivent funds.

“Our districts and congregations have responded magnificently after the hurricane,” Harrison said.  “They have become distribution centers for food and volunteer assistance, helping the elderly and anyone else affected — the whole gamut.  Our pastors have been involved in everything from rescue to housing people in need.”

He said that in the Southern District, congregations — “many of them with property and members hard-hit by the hurricane — are serving their communities, caring for displaced people, and volunteering to help each other.” 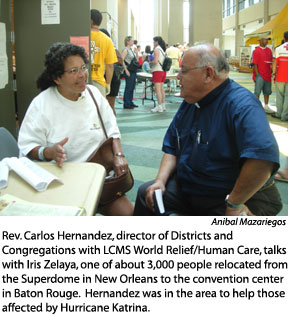 n floodwaters from the storm cut off roads leading to the office in New Orleans.

“They asked for volunteers at the end of the service,” Harrison said, “and en masse, maybe 200 people pressed forward.”

Harrison said he has heard that members of LCMS congregations “dropped everything and headed south to help in any way they could, from as far away as the upper Midwest and Pacific Northwest — convoys of members with supplies, chainsaws and backhoes — you name it.”

Synod President Gerald B. Kieschnick was one of those who saw that chainsaws got delivered to the Southern District.

Kieschnick flew to Baton Rouge on Labor Day to tour Synod congregations in the area Katrina hit.  That was the day after he attended the installation of Dr. Dale Meyer as president of Concordia Seminary and two days after returning from Berlin, where he participated in the meeting of the International Lutheran Conference.

He said that when he asked Harrison and Southern District President Kurtis Schultz what he might bring along with him, they replied, “chainsaws!”

“To the credit of American Airlines — in the person of manager-on-duty and LCMS member Paul Hechsel — I was able to check eight 20-inch Husqvarna and Poulan chainsaws, purchased the night before by my senior assistant, with the $80 extra-baggage surcharge for each generously waived by the airline,” Kieschnick writes in the October issue of The Lutheran Witness.

“Thanks to the generosity of our donors, and owing in no small part to hardworking staff and volunteers, the response of LCMS World Relief and Human Care to Katrina has been unprecedented,” Harrison wrote.  “In terms of the scale of the relief being sent and the help being provided to thousands of hurting people, the capabilities of the Synod have swung into action like never before, and that includes the volunteer capacity of LCMS World Mission and the strength of the Lutheran Laymen’s League and the Lutheran Women’s Missionary League.  The scope of this catastrophe requires nothing less.”

Through the work of Lutheran Social Services of the South, Harrison notes in his article for the magazine, “Lutheran Disaster Response [LDR] is poised to make a huge impact not only on affected LCMS people but also on many outside the scope of the Synod.”

Within two days after Katrina hit, Norfolk, Neb.-based Orphan Grain Train had necessary food and water on the ground in the Southern District.

LCMS World Relief/Human Care purchased four full-size refrigerated units and a St. Louis-area trucking firm waived most of the costs for getting five shipments of “specifically requested equipment and supplies” to Orphan Grain Train drop centers in the Southern District.

“Orphan Grain Train is an unbelievable LCMS entity, with fantastic capacity to bring aid to people in need,” Harrison said.

“The LCMS cannot be passive and simply assume others will deal with everything,” he told Reporter.  “LDR, the social ministry agencies, the districts, our congregations, everybody’s stronger if the LCMS dares to step up to the plate with its national capacity.

“Without bringing LCMS capacity and developing LCMS capacity to handle issues such as responding to hurricanes like this,” Harrison said, “we would never have a response that was anything close to what it could be — what it is in this case of response to Hurricane Katrina.”

“The agencies with LDR bring fantastic capacity to the intersection,” Harrison sa