A funeral service for Izidor will be held Saturday, March 26, at First Evangelical Lutheran Church in Les Cayes.

Izidor, 54, studied theology at Concordia Theological Seminary, Fort Wayne, from 1985 to 1987.  He was ordained in 1992 and began mission work in Les Cayes 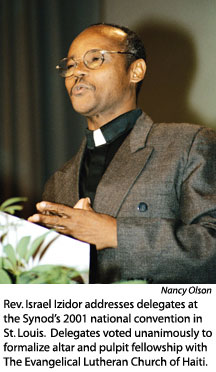 that same year, hosting worship services and a school for 20 children in his home.  Izidor also served as the founding president of The Evangelical Lutheran Church of Haiti.

The Haitian church body was officially recognized as sharing altar and pulpit fellowship with The Lutheran Church–Missouri Synod in 2001, when delegates to the Synod’s national convention in St. Louis voted unanimously to formalize that relationship.

Izidor was known for his enthusiasm and dedication to sharing the Gospel among Haitian people and around the world, according to Dr. Douglas Rutt, associate professor of pastoral ministry and missions at Concordia Theological Seminary and former area secretary for Latin America with LCMS World Mission.

Izidor “was a visionary leader who did the work of an evangelist with great joy and extraordinary zeal,” Rutt said.  The Haiti church body, he added, “will certainly sense the loss of a great leader and guiding light who has been an inspiration to many.”

“Our hearts are heavy at the passing of this highly esteemed brother in Christ,” said LCMS President Gerald B. Kieschnick.  “President Izidor has led the church in Haiti during some difficult times, both for the church and for the country itself, which has known great strife.  We pray that God will comfort and strengthen his wife and children in their grief, and we pray as well for all the members of our partner church in Haiti.”