Six months after the Dec. 26 earthquake and tsunami killed hundreds of thousands and leveled entire villages along the Indian Ocean coastline, relief and mission leaders say that the generosity of Synod donors has accomplished much to help meet the immediate needs of those affected.  Now, following extensive appraisals of the lon 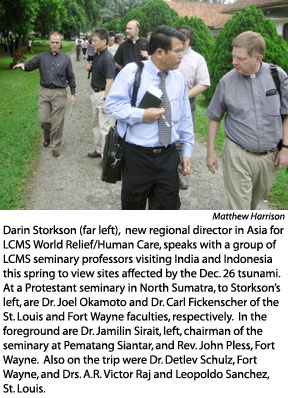 By the first week of July, donors had given $5,582,598 to LCMS World Relief/Human Care for tsunami relief, including $100,000 in a matching grant from the Marvin M. Schwan Charitable Foundation.  From that total, $1,809,286 has been approved for an array of tsunami-relief projects in Indonesia, Sri Lanka, India, and other hard-hit areas.

“The tsunami brought a whirlwind of activity and response to immediate needs in the first months after the disaster,” Rev. Matthew Harrison, executive director of LCMS World Relief/Human Care, told Reporter.

Harrison said that relief work now is in an “intermediate phase,” as his office, LCMS World Mission, deployed staff in South Asia, and partner-church representatives work to attain non-government, non-profit status in Indonesia, Sri Lanka, India, and other countries.  Gaining such status, he said, will help “smooth out numerous logistical issues in continuing our response to the tsunami, including the prospect of rebuilding towns and villages.”

“We are absolutely committed to spending at least 95 percent of the dollars our members have unselfishly given for direct tsunami relief,” Harrison indicated, pointing out that the remaining 5 percent would “help cover the costs of administering” the tsunami-relief funds.

“We also are committed to working with LCMS World Mission and our partner churches in this effort in order to leverage and strengthen local Asian Lutheran communities,” he said.  “We are absolutely committed to aid victims in ways which increase local Lutheran capacity to reach out in love and care for body and soul.  Deployed staff is ensuring accountability for dollars spent and is working to establish appropriate local non-government organizations [NGOs] to achieve these ends.”

Harrison said that trips he has made to the tsunami-affected areas — the latest being this spring with six Synod seminary professors — tell me we are on the right track.”  He also mentioned the work of Lutheran World Relief (LWR), Baltimore, in which the Synod participates.

The “Wave of Giving” campaign had brought in nearly $17.9 million for tsunami relief as this Reporter went to press, including $5 million in matching funds from Thrivent Financial for Lutherans.

“Through LWR, LCMS World Relief has provided funding for work carried out by a broad panoply of partners,” Harrison said.

“But with LCMS partner churches, LCMS World Mission, our auxiliaries, recognized service organizations, and other select Lutheran partners, we are able to work in ways which are specifically and confessionally Lutheran,” he said.

Darin Storkson is the LCMS World Relief “deployed staff” person in Asia.  Since mid-April, he has been LCMS World Relief’s regional director-a new position that gives him responsibility for approving all tsunami-relief grant requests for that office.

Denow and Hoeppner were on teams visiting Indonesia and Sri Lanka just after the tsunami struck to assess needs in those countries.

When he accepted the position with LCMS World Relief/Human Care, Storkson had for the past 10 years directed an educational and medical ministry in the remote villages of Bali, Indonesia, sponsored by his home congregation, Resurrection Lutheran Church in Boron, Calif.

At the same time, he served as executive director of the Bali Tourism Board and previously was a delegate of the International Committee of the Red Cross.

In Indonesia, estimates place the number of those dead from the tsunami at 200,000, with half a million remaining homeless.

Storkson told Reporter that although the emergency phase of relief work in Indonesia is “largely over,” the situation “remains grim,” especially in Banda Aceh and Nias, two areas hardest hit by the tsunami waves.  He said that the 500,000 people of Nias and the surrounding islands have no functioning hospital.

“Indonesia is an exceedingly difficult country in which to work under the best of circumstances,” Storkson said, adding that recovery there is estimated to take 10 years at least.

“So, we are working hard to get our foot in the door through legal and government recognition,” he said.  “In the meantime, of course, we are working with LCMS World Mission to identify and respond to humanitarian needs.

“All of this is complicated by extensive damage to infrastructure, which wasn’t great to begin with,” Storkson said.  “There are enormous logistical challenges in these remote areas, and there are complicated bureaucratic challenges in areas in which entire towns were destroyed, along with all records.”

He said that since there is no LCMS partner church in Indonesia, Synod relief efforts there are being channeled “through a variety of Christian bodies.”

“We desperately need everyone’s ongoing prayers,” Storkson said, “as do the millions of victims.  Pray that we might be blessed to be tools for the glory of God in the midst of this devastation.  We also need the continued financial support of our generous donors.”

Hoeppner said that the situation in Sri Lanka is “somewhat better,” with a “huge rebuilding effort under way, although “there is a lot of frustration about getting it all done.”

About 30,000 people lost their lives in that country, and hundreds of thousands are still homeless, she said, although most “do have some shelter, even if it’s tents in refugee camps.”  She said the government there “is pretty well funded,” although rebuilding — as in Indonesia — “will take at least 10 years.”

“The main immediate work ahead is in set