In Africa, the Masai can start a fire with two pieces of wood, rolling a long rod quickly back and forth between their hands until the friction at its tip produces a red-hot ember.  Holding a small bundle of straw to the ember, a tribesman blows gently until the straw bursts into flame. 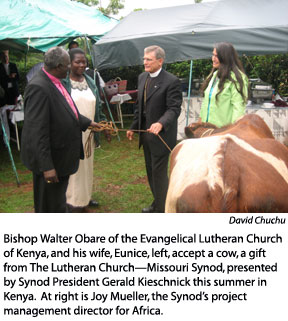 Quoting the Apostle Paul in 2 Tim. 1:5-9, Kieschnick rubbed his hands together as he encouraged some 300-plus worshipers to “fan into flame the gift of God that is within you.  For God did not create us in a spirit of timidity, but in a spirit of power, of love, and of self-discipline.  So, do not be afraid to witness to our Lord, Jesus.”

Later during the three-hour service, as he and Bishop Walter Obare of the Evangelical Lutheran Church in Kenya explained the Ablaze! Gospel-sharing initiative, Kieschnick again rubbed his hands together and blew an imaginary ember.

“And spontaneously, all of the people in the church did the same thing — they rubbed their hands together and blew,” Kieschnick recalled.  “Even though there were some language barriers — I was preaching through a translator — it was clear at that point that [my message] hit home.”

That worship service, at Obare’s home congregation, was a highlight of his 10-day odyssey to Kenya, Kieschnick said, which included a tour of a wild-game park, a long walk down a muddy road when his vehicle got stuck at the edge of a ravine, and an Ablaze! conference with representatives from Lutheran church bodies in Kenya, South Africa, Ghana, Nigeria, Sudan, and Eritrea.  The latter two — Sudan and Eritrea — have not yet established official partner-church status with The Lutheran Church–Missouri Synod, Kieschnick said, but are interested in pursuing closer ties, so Lutherans there were invited to the conference.

Africans are “absolutely” excited about Ablaze! and have adopted it as their own, “probably even more enthusiastically than some in our own Synod,” Kieschnick told Reporter.  “When there’s something that creates energy, momentum for their growing church — which is ablaze — they grab hold of it.”

Ablaze! is the LCMS World Mission initiative — adopted by the Synod’s national convention in 2004 — to share the Gospel with 100 million people by 2017, the 500th anniversary of the Reformation.  LCMS World Mission is encouraging Missouri Synod partner church bodies in 29 countries to take part in Ablaze! by sharing their faith with others and posting their outreach efforts on the Ablaze! Web site at www.lcms.org/ablaze.

Dr. Paul Mueller, regional director for Africa with LCMS World Mission, also attended the Africa Ablaze! conference and says African Lutherans “are far ahead of us” in evangelism and church planting.  The Lutheran Church of Nigeria, for example, has an Ablaze! goal of one million people — not to share the Gospel with one million, but to increase its 80,000-plus membership by one million! — by 2017.

Mueller says he’s even heard about a newly planted church in Liberia that’s been named “Christ Mission Ablaze Lutheran Church.”  Africans, he says, “are sharing Christ and they’re planting churches all over the place.”

Kieschnick says he’s amazed by the evangelistic nature of Africans, especially in light of the “huge challenges” they face in such things as education, economics, transportation, and healthcare.  “Rare is the person in Kenya who does not have a family member who has died of AIDS, it’s so rampant,” he said.

“And with all those challenges, the spread of the Gospel is strong and the Spirit is working mightily in many parts of Africa, certainly in Kenya.”

While in Kenya, Kieschnick presented a cow to Obare on behalf of LCMS Lutherans.  “Cows for Kenya,” a project of LCMS World Relief/Human Care, has provided some 250 cows to Evangelical Lutheran Church in Kenya (ELCK) pastors and other church workers as a way to supplement their income.

Obare agreed to accept a cow only after all other ELCK pastors had received them, according to Kieschnick.

Although Kieschnick already had visited other African partner-church bodies, this was his first visit to Kenya.  The ELCK is the Synod’s newest partner church — the two church bodies established fellowship just two years ago, in 2004.

As he travels, Kieschnick is always struck, he said, “by the fact that Lutherans around the world know about The Lutheran Church–Missouri Synod.  They respect [us].  They need and seek help from [us]. …  Sometimes it’s just affirmation, acknowledgement that they exist, a word of encouragement, knowing that we pray for them.

“And every time I go, I come back with a renewed sense of what I call ‘humble pride,’ because our church body has been blessed over the years with a mission heart.”

Kieschnick said he believes that now is “the right time” for Ablaze!

“The world is waiting to hear the Gospel, and we’ve got the Gospel,” he said.  “We are a confessional Lutheran church and our confession must be heard.  That means we take that confession into the world, and we unapologetically, unashamedly, quite energetically and vigorously, as our mission statement says, ‘make known the love of Christ by word and deed within our churches, communities, and the world.’”