Commentary: Clearing the confusion — the issue of stem-cell research

“If you’re so ‘pro-life,’ then why can’t you support stem-cell research?  Shouldn’t being pro-life also be about finding cures to save future lives?” demanded the e-mail across my screen.

Ironically, the writer was absolutely correct.  Being pro-life is about protecting and supporting all human life — now and in the future.  And as a pro-life 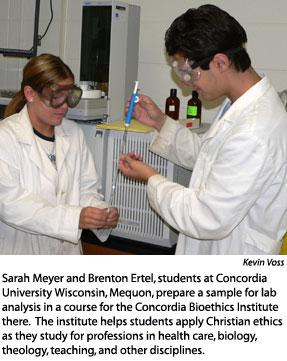 Christian, I can support adult stem-cell research, but not research involving the destruction of live human embryos.  The terminology can be confusing.

Bioethics simply refers to the ethics involved with medical technologies and biological research.  This implies that the study of bioethics should be interdisciplinary, purposely bringing together the complexities of medicine, science, law, religion, philosophy, and public policy.

But in our media-saturated world we get our information from 30-second sound bites, and often accept the word of others because they are on our TV screen.  As laypeople, we form opinions based on the latest polls and try to avoid all those pesky “controversial” issues.  After all, they are experts, right?

God calls Christians to be light in a dark and confusing world.  But often Christians are the ones feeling confused — at least when it comes to bioethics and complex life issues.

Headlines report that cures from embryonic stem-cell research (ESCR) are just around the corner, and claim that everything from Parkinson’s disease to paralysis will be eradicated if we just allowed federal funding for embryonic research.

The hard facts tell another story.  Embryonic stem cells are still unable to be used in humans because they have repeatedly caused cancerous tumors and other undesirable and abnormal cell growth in animal trials.  Ironically, despite all the attention, embryonic stem-cell research has offered no treatments or cures; none — not even any clinical trials at this point.

By contrast, adult stem-cell research has proven extremely successful in treating over 70 illnesses to date, by using stem cells from umbilical cord blood, placenta, bone marrow, and a host of other cells obtained from living donors.

The fact that human life begins at conception is no longer disputed.  Even a one-cell embryo has all of the individual DNA programmed inside to determine whether that child will grow, have blond or brown hair, or Mom’s or Dad’s nose.  As Dr. Jim Lamb of Lutherans For Life likes to say, “These are not potential human beings.  These are human beings with potential!”

But even if embryonic stem cells could live up to the hype and create cures, it would be irrelevant to the ethics of the issue.  Despite a recent wave of media reports to the contrary, due to inaccurate research, embryonic stem-cell research still requires the destruction of the embryo.  If someday these cells could be obtained without destroying the embryo, we could applaud the effort and pray that useful treatments might be found.  Until that theoretical day, God’s Word is very clear prohibiting us from taking any human life—even if our feeble motives appear compassionate.  God is the author and designer of life, from beginning to end.  And we don’t have permission to edit His creation.

Adding to the ethical dilemma, the stem-cell debate is not only about using “left-over” embryos from in-vitro fertilization.  Researchers now want to legally allow human cloning in order to obtain the vast amounts of embryos needed for ESCR.  But one would never know that, because every biotech public relations executive knows that the public broadly rejects this research when they understand it involves human cloning.  According to an ABC News poll, nearly nine out of 10 Americans believe that human cloning should be illegal.

In Missouri, a craftily worded state constitutional amendment will appear on this November’s ballot.  It removes decisions about ESCR from the oversight of the legislature and paves the way for tax dollars to be used for this unethical research.  The referendum’s language is deceptive, by claiming to “ban cloning.”  Voters may not notice that the term cloning has been conveniently redefined.  Claiming to seek permission only to allow Somatic Cell Nuclear Transfer (SCNT), the amendment insults informed Missourians who know that SCNT is simply the correct scientific term for cloning — the exact process used to clone Dolly the sheep.  Six neighboring states and seven countries have banned this unethical research.

If the amendment is passed, Missouri may become the Promised Land for unregulated, unrestricted biotech research and cloning at the taxpayer’s expense. And this initiative is obviously a test case for the rest of the Union.

It’s critical that individual Christians recognize that to pursue truth, we need a helpful context for forming our opinions.  By grounding our search in the Scriptures we can clear the ethical fog.  Of course, the Bible does not mention stem-cell research.  But we can find clear references to God’s understanding of precious human life.  Scripture speaks about early life in Psalm 51.  “Behold, I was brought forth in iniquity, and in sin did my mother conceive me” (v. 5). Here David acknowledges his need for a Savior even from the moment of his conception as a tiny one-cell human being.  We could also consider Luke 1:41, where John the Baptist leaped in-utero when in the presence of the Christ, who according to the scriptural timeline, would still have been a tiny embryo — likely not even implanted in Mary’s womb.

But public ethical debates often disregard Judeo-Christian tradition and biblical context.  At this point, Christians would do well to stay interested, informed, and focused.  We should not underestimate our ability to engage these ethical questions in a serious and thoughtful way.  Sometimes, the clearest thinkers are those unencumbered by scientific biases and corporate financial interests.  Investing a small amount of time in the biological basics will enable you to listen to ongoing ethical debates with a critical ear, without scientific jargon or emotional headlines