Ever since the 1998 Synod convention encouraged work to begin on a new hymnal for our church body, Lutheran Service Book has been in careful and loving preparation by many men and women who love their Lord and their church.

The Synod’s Commission on Worship and Concordia Publishing H 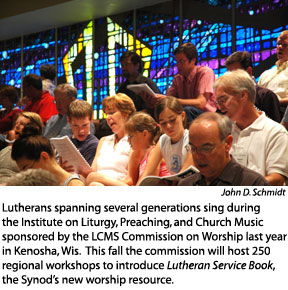 ouse are preparing to jointly publish the new worship resource by this fall.

We have long recognized that use of God’s spoken and sung Word in our liturgies and hymns keeps us firmly grounded in the Holy Bible — the one anchor and truth for our lives.  Our hymnals are God teaching us how to worship Him by putting His Words into our mouths through the words of the liturgy.  They are the sermons on His Word sung to each other through the texts of hymns.

Lutheran Service Book stands in a long line of books that have helped us to express our joys, sorrows, thanks, praise, awe, calls for help, prayers, and deepest expressions of human feeling and emotion.  The liturgies and hymns have helped us to come together in all these things and more.  They help us to support each other, to teach each other, and to confess to one another.  They teach us the Word of God in a most memorable way from an early age.  They provide us with a rhythm for our lives.

When I was growing up in Rochester, N.Y., I remember looking forward to Pentecost with great anticipation.  It meant that school was almost out for the summer.  There was the long season of Trinity — later called the Season after Pentecost.  It didn’t matter what it was called, since it was summer vacation to me.

A few weeks after school started, we sang “A Mighty Fortress.”  That meant we were at the edge of the holiday season, with lots of food, lots of people around, and, of course, finally culminating in the pile of gifts under the tree in the living room.

As the years have passed, the words of “A Mighty Fortress” have taken on increasingly rich and true meaning for me.  I now know what it means to need a trusty shield and weapon.  I know that fighting by myself comes to nothing and that Christ is the one fighting for me.  I know what it is to see Satan around me and see him felled by one little word.  Experiencing the deaths of an infant daughter in 1984 and my first wife in 1993, I know what it is to have child and wife taken from me and understand that the Kingdom remains mine, as it is theirs in the Church Triumphant.

As I grew, I began to associate times and seasons with hymns we sang on Sunday morning.  Some hymns defined the rhythm of the hour of worship.

“O Day of Rest and Gladness” and “Open Now Thy Gates of Beauty” were hymns that might begin our time together.  “On What Has Now Been Sown” and “Savior, Again to Thy Dear Name We Raise” were often how we ended.  When I heard the organ begin to play “The Savior Kindly Calls,” I knew there was about to be a baptism.  “We Give Thee But Thine Own” was a reminder of the source of material blessings.  “Thy Table I Approach” taught me much about the Sacrament long before I was catechized and confirmed.

The seasonal hymns defined the movement of the year — the church year, the school year, even the weather.  There were special hymns for special occasions.  “From Greenland’s Icy Mountains” often meant that we would be going that afternoon to a huge Lutheran Hour Rally with Lutherans from all over the area.  And did we ever sing there! — hymns like “The Church’s One Foundation,” “Hark! the Voice of Jesus Crying,” and “Jesus Shall Reign Where’er the Sun,” with a descant that would just soar over the three or four thousand people.

A special time for me each Sunday was when my pastor announced the grace of God unto all of us, and that by the command of Jesus Christ all my sins were forgiven.  Pretty amazing stuff!

Years passed, and a new blue hymnal was put in the racks.  I didn’t like this hymnal.

Then one day we sang “Lift High the Cross.”  It became an instant old favorite.  Another time we sang “Hail Thee, Festival Day,” which has also become a favorite. “O God, O Lord of Heaven and Earth” was such a powerful hymn that I didn’t want to lose it.  “This Is the Feast” was new, but it seemed right and I was glad to have it.

I found that I was learning many of the new hymns, but I could still remember the old ones, too!

It took some getting used to that “Abide With Me” now had only five stanzas instead of eight.  I still remember all eight.  I’m fairly certain that the last stanza will be on my mind and my lips when I move to the Church Triumphant.  That will put me in the company of thousands of people before me, and with thousands of people after me.  It’s going to be in Lutheran Service Book, too.

I’m looking forward to Lutheran Service Book.  I already know some of the new content.  “Alabaré,” “What Wondrous Love Is This,” and “Voices Raised to You” are just three of my new favorites in the new hymnal.

Holy Scripture and the Lutheran Confessions join us as Lutherans.  Lutheran Service Book can also do its part to join us, to bring us together in worship and praise and song.

I can sing many hymns and several liturgies from memory.  I can’t recite any of the sermons I’ve heard, and I don’t remember as much of the Small Catechism as I’d like.  But I sure do remember a lot of hymns and liturgies.  They bring the Word to me at any time during my day.  I want to ensure that my young daughter has these grand texts deeply imbedded in her memory as they are in mine.  I want to know that in times of trouble and sorrow, in times of joy and happiness, she will be able to recall these wonderful words taken from the Scriptures and matched with music.

James D. Lowitzer, a member of Faith Lutheran Church, Collierville, Tenn., is a former member of the Synod’s Commission on Worship.