A U.S. soldier is patrolling an Iraqi village when bullets whiz past him.  He returns the fire and is alarmed to see that he’s hit a small boy, whose arm has been completely severed.

A female soldier is driving a supply truck at dusk in Iraq.  A boy, perhaps 10, runs in front of the vehicle, but she has been trained not to stop.  She hits him and keeps driving.  Back home in the States, she thinks about the Iraqi boy all the time.  Especially when she looks at her own 10-year-old son.

An Army chaplain, also in Iraq, develops a friendship with one of the translators, a young Iraqi woman.  He is horrified one day when he sees her body — savagely mutilated and hanging from a tree.  It’s a sight he sees again and again, every time he closes his eyes.

“War attacks our sense of humanity and affirms our fallen nature,” says LCMS Chaplain Thomas Waynick, who shared the above stories — all true. 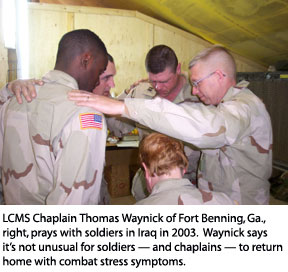 “You cannot go to war and come back the same person.”

Waynick, director and clinical supervisor at the U.S. Army Family Life Chaplain Training Program in Fort Benning, Ga., speaks from experience.  He’s been to Iraq himself and has counseled soldiers and chaplains returning from war — many with combat stress symptoms.

Nearly one in five people returning from war duty experiences post-traumatic stress disorder, severe anxiety, or depression, according to Waynick.  Even deployed chaplains, who do not fight or carry weapons, need time — and sometimes, counseling — to readjust to life back home, he says.

Nightmares, irritability, and a host of other ills often plague chaplains who have been “on call” 24 hours a day — hearing soldiers’ horror stories, seeing dismembered bodies — and then return home to rejoin their families and resume parish activities.

“They’ve been through things that don’t always make them feel like a hero,” says Waynick.  “The ugliness of war really hurts.”

Acknowledging the needs of deployed and returning military chaplains — and exploring how the Lutheran church can address those needs — was the focus of a recent conference sponsored by LCMS World Mission’s Ministry to the Armed Forces and LCMS World Relief/Human Care.

Participants at the conference, held Aug. 18 at the Synod’s International Center in St. Louis, included staff members of those two entities, military and Veterans Administration chaplains from The Lutheran Church–Missouri Synod and the Evangelical Lutheran Church in America, and representatives of the Synod’s Northwest District, which already offers resources for returning soldiers and their families.  Waynick also attended.

The conference was convened through the efforts of Rev. John Fale, director of specialized pastoral care with LCMS World Relief/Human Care, and Rev. Mark Schreiber, director of the Synod’s Ministry to the Armed Forces.

About half of the Synod’s military chaplains serve the Reserves or National Guard, so they’re leaving the parish to “go through something totally foreign 24/7 — a unique and dangerous environment,” explains Chaplain Ted Wuerffel, associate director of the Synod’s Ministry to the Armed Forces.

“Chaplains go from a rural church in Iowa [for example], to Iraq, and back — that can be rough,” he said.  “What should our church be doing for them?”

The Missouri Synod has 90 active-duty military chaplains and 94 who serve part time with the Reserves and National Guard.  Twelve to 15 of the part-timers are mobilized at any given time, according to Wuerffel, and can be called to long-term duty — a year or longer — more than once.

The conference was helpful, he said, because it brought together LCMS and ELCA chaplains and others experienced in dealing with deployment and re-entry issues such as post-traumatic stress, and participants shared information and ideas.

Those ideas — which may be developed as churchwide strategies — include:

Healing isn’t possible without support, says Waynick, who also attended the recent conference, and each pastor’s “church family” can help provide that.

“There needs to be that recognition that our pastors … have been through something — a life-changing experience,” he says.  And if a pastor has trouble readjusting to civilian life, “that needs to be addressed,” Waynick adds.  “And the church needs to be there with the healing Gospel of Christ.”

Also useful to the Synod at-large, as it forms a support system for military chaplains, is the Northwe 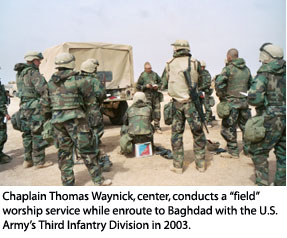 st District’s “ministry to military personnel, families, and congregations.”  The year-old ministry offers numerous resources that can be used as a “model” for Synodwide programs, says Wuerffel.  Those resources include a “welcome home” service for use by congregations, prayers, tips, books, Web-based “links” to local government agencies, and a list of area chaplains who can provide advice and support.

The district just finished a survey of its congregations, to find out “what works” in such ministries, and plans to share that information districtwide.  Other goals include producing a DVD that will show church workers and congregations how they can support returning service men and women, and helping teachers and directors of Christian education support children in military families.

The ministry’s leaders believe that every Northwest District congregation will be affected, in some way, by military deployments, and want to “ensure that every service member and family will experience