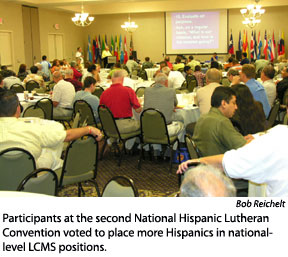 More than 200 people attended the gathering, held every three years.  It is sponsored by the Irving-based National Lutheran Hispanic Mission Society to support and encourage Hispanic ministry in The Lutheran Church–Missouri Synod.

Convention attendees discussed the need for a staff person to direct LCMS Hispanic ministries on a national level, and adopted a resolution that calls on Hispanic congregations to nominate candidates and to petition the Synod’s 2007 convention to “employ an executive for Hispanic ministries.”

In a related resolution, the convention voted to work with districts, congregations, and other LCMS entities to raise funds to support the new position.

The convention also voted to:

Dr. Leopoldo Sanchez, director of the Center for Hispanic Studies at Concordia Seminary, St. Louis, addressed the convention theme in his keynote, and several workshops also focused on aspects of the convention theme, “God’s Purposes in My Life, My Family, and My Church.”

The convention also included a Hispanic worship service at Our Redeemer Lutheran Church, Irving, and a banquet with entertainment provided by a mariachi band from El Paso, Texas.

During the banquet, convention-goers honored Rev. Carlos Puig of Sugar Land, Texas, for his 30 years of service to LCMS Hispanic ministry.  Puig, who began his service as a lay minister, has served as a pastor, as director of Hispanic ministry for the Synod’s Board for Mission Services, as ethnic resources editor for Concordia Publishing House, and as a missionary to Panama.

Letters to the Editor (September)