ORLANDO, Fla. — The LCMS Council of Presidents (COP) focused on “restoring harmony and trust in the … Synod for the sake of Christ’s mission” at its Nov. 12-14 meeting here. 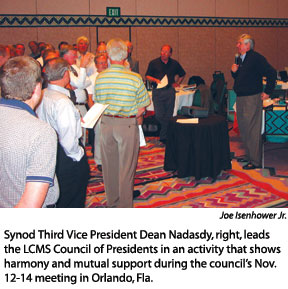 The vote on the direction of a working draft laying out the proposed alternate-route program — currently known as “Pastor-Specific” Ministry — came after members discussed in detail the proposal and the need for fine-tuning the wording of that proposal.

Discussion continued the council’s consideration of the proposal at its September meeting, when the proposed alternate-route program was termed “Pastor Supervised.”

Basically, the concept of the proposed program would include a special curriculum that would take four years to complete.  It would be separated into pre-ordination and post-ordination curricula.

The concept grew out of the Pastoral Formation Leadership Summit held earlier this year, and is being proposed by the oversight committee for Distance Education Leading to Ordination (DELTO).

One of the DELTO representatives — California-Nevada-Hawaii District President Robert Newton — told the COP that such a program is needed because of the “huge, huge need [to fill pastoral] vacancies in areas where Christ is not named.”

Newton said that there is especially “need for training in the language and culture of the unchurched.”

The DELTO committee, working with the COP and seminary faculties, will continue to fine-tune the Pastor-Specific Ministry proposal, which would need to be adopted by a Synod convention to go into effect.

Plans for the COP’s fiscal conference unfolded as Synod Fifth Vice President David Buegler recommended that the conference should include each district’s president, “an additional person … with significant understanding of the district’s unrestricted budget,” and a parish pastor of a “district congregation that is a leading contributor.”

Buegler is chairman of the Synod’s Blue Ribbon Task Force for Funding the Mission, which issued its report earlier this year.

“With God-pleasing sharing of mission and ministry challenges,” Buegler said, “this fiscal conference should be expected to adjourn with a Synod/district agreement that will strive to do the following:

1. Determine the annual total amount of unrestricted dollars to be submitted to the national budget by the 35 districts.

2. Decide the fair share of each district toward the fulfillment of the commitment from step number 1.

3. Plan ahead three years in advance to aid in district/Synod planning.

4. Gradually increase the total amount submitted to a level of at least $25 million by 2017.”

With a total of about 100 participants, the conference will take place in St. Louis, with costs to be covered by the districts.

The COP’s look at restoring harmony and trust in the Synod during the November meeting is part of its overall theme of “Leading Together … for the Sake of Christ’s Mission.”

Two guest speakers — Rev. Wally Arp and Dr. Wayne Wilke — addressed  harmony and trust in their presentations to the council.

Arp, senior pastor of St. Luke Lutheran Church, Oviedo, Fla., told the council in his Bible study that harmony and trust in the church begin with baptism in Christ.

“It’s God’s time machine,” Arp said of baptism.  “It takes us to Jesus on the cross, and provides a daily remembrance of His death and resurrection.”

Arp suggested that Christians consider that remembrance when they take their morning showers.  As the water falls from the shower head, he said, “think of the day to come as the first day of the rest of your life of faith in Christ.”

“We have hope because of Who we have hope in,” Wilke told the council in his remarks.

Wilke, a member of the LCMS Florida-Georgia District staff, is executive director of the Concordia House of Studies.

“We are raised again to a new life in our baptism not to achieve the idealized past of our beloved Missouri Synod,” Wilke said, “but to claim His promised future of participating in His extension of the Church to the uttermost ends of the world.”

Wilke reminded the COP that Martin Luther’s explanation of the Eighth Commandment “reminds us not only to avoid the negative, but also to practice the positive.”

Also during the November meeting, the council — comprised of the 35 district presidents and members of the Synod’s praesidium — elected members to committees and as representatives to a number of other LCMS groups.

In addition to meeting with the Synod Board of Directors, the COP also participated in a worship service with Synod mission partners meeting at the same Orlando convention facility.

The next meeting of the COP will be held in tandem with its fiscal conference.