Thank God for graduate programs, which are continuing to draw ever-increasing numbers of students to the Synod’s universities with each passing year.

This fall’s total undergraduate and graduate enrollment of 20,091 for the 10 Concordia University System 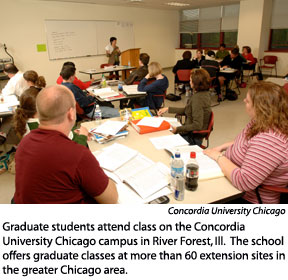 (CUS) schools nationwide sets another record and represents an increase of 1,522 students, or 8 percent, since last fall.

Like previous records set every year since 2002, this year’s figure is due to the schools’ burgeoning graduate-student enrollment — 6,661 this year, an increase of 1,750 students or 36 percent.

In fact, without the graduate students, the total CUS headcount would be down, primarily because of demographics as the pool of college-age young people in the United States continues to shrink.

Total CUS enrollment for undergraduate students this fall stands at 13,430 — a drop of 228 students, or 1.7 percent.

Dr. Kurt Krueger, executive director of the Synod’s Board for University Education and president of the CUS, said he considers this year’s enrollment news as “basically good.”

“I’m very pleased with how our schools are growing and improving in the quality of the education they provide for our students,” he said.  “And I think we can look for even more growth and more improvement in years to come.”

As far as attracting more students, offering graduate-level courses seems to be the key, Krueger said.  Eight of the 10 CUS schools offer graduate programs and all saw increases in their graduate-student enrollment.  Undergraduate enrollment fell in four of the eight schools, though.

“Having all these graduate students does give us a chance to promote our values and our Christian world view,” Krueger noted.  All CUS professors are Christian, he said, and he knows many have influenced their students — both graduate and undergraduate.

All CUS undergraduate students are required to take theology courses, although graduate students are not, and those classes often pique a student’s interest in Christianity, he said.  Krueger pointed to a letter he received recently that was written by a former CUS student, a non-Lutheran, who is now serving as a missionary overseas.

“Because of those [CUS] theology classes, I reconsidered my faith and recommitted myself to Christian service,” the former student wrote.

“These students are going to go someplace anyway [to earn their degrees],” Krueger added, “and if we can attract them to taking classes from Christian people, from a Christian university — where they know full well what the mission is — I think we can add value to their lives beyond their professional development and also have a hand in their spiritual development.”

Leading the way in graduate programs among CUS schools is Concordia University Chicago, River Forest, Ill., which reported two enrollment records this fall — 3,710 in total enrollment (a 33 percent increase) and 2,636 in graduate-student enrollment (up 50 percent).

In contrast, the school’s undergraduate enrollment of 1,074 rose by just 4 percent.

Its graduate program is thriving, according to administrators, because it “takes its classes to the teachers” at more than 60 off-campus sites, mostly public elementary and high schools in the greater Chicago area.

“In other words, we are delivering quality education in a new way,” says Dr. John F. Johnson, the university’s president.

factor in adopting the name of ‘Concordia University Chicago,”’ Johnson said.  “It is more descriptive of our sphere of operations and influence.”

The CUS school “provides graduate credentials to more public school teachers than any other private college in the state of Illinois,” according to Johnson, and plans to expand its “cohort” model to other locations and majors, including adding master’s programs in gerontology and counseling.

“All of our graduate programs are consistent with our mission of equipping men and women to serve and lead in a diverse, interconnected, and increasingly urbanized church and world,” he said.

But, tempering that rise in the number of graduate students is the dwindling number of church-work students at CUS schools, from 2,613 in fall 2005 to 2,406 this fall — a drop of 207 students.

That “steady slide” is the area of “most concern” to Krueger and the Synod’s Board for University Education, he told Reporter, and will be discussed at the board’s next meeting in February.

One reason is that fewer children of church workers are pursuing church careers, according to Krueger.  “Years ago, if an LCMS pastor had three sons, one would likely go into the ministry,” he said.  “My dad was a pastor and three of us — out of four kids — are in church work.  That apparently is not happening anymore.”

Krueger says these young people might be discounting church-work careers because they’ve seen their parents’ work-related stress, or they view church vocations as low-paying professions.

But “very few people pay $20,000 for tuition [at a CUS school] — especially church-work students,” says Krueger.  “There are all kinds of scholarships available for students studying for church professions.  And often times, attending a Concordia is as cheap as — or cheaper than — attending a four-year flagship state school, because of the scholarships available.”  (Click here for related story.)

Also down is the number of LCMS students attending CUS schools — that figure fell from 4,996 in 2005 to