ORLANDO, Fla. —   “This is a wonderful event,” said Carol Oetting of Seward, Neb., as she sat in the meeting hall between sessions of the Lutheran 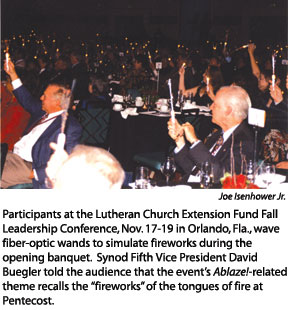 Attending the annual conference for the first time, Oetting joined some 750 participants who gathered Nov. 17–19 at Disney’s Coronado Springs Resort under the theme “Serving One People: Ablaze! … Fanning the Flame.”

“I can truly see the Lord at work through the people here and through Ablaze!,” said Oetting, administrative assistant to LCEF Nebraska District Vice President Paul Pettit.

She added that “LCEF’s number-one strength is its commitment to faith and to serving people of God — a commitment that builds up the church, both physically and in faith.”

Paul and Gerry Brill of Castle Rock, Colo., said that this year’s leadership conference was the tenth they have attended.  Both are LCEF investors.

“We know what kind of good things LCEF can do,” said Gerry Brill, explaining that their home congregation –- Epiphany in Castle Rock –- received LCEF loans to buy the farmland where the church building now sits, as well as to expand the facility.

Carol Mittelstaedt, who coordinates the work of mission societies and secures funding for missions in the LCMS Atlantic District, told Reporter that LCEF funds have been vital to outreach in the New York City area.

That outreach includes ethnic immigrant outreach to many groups, including Bengalis, Indians, Chinese, and Africans.

“What a great opportunity LCEF offers,” said Mittelstaedt, “when church members invest their money that can be used for mission outreach.”

Freitag noted that St. Martini School, for which LCEF developed a business plan and provided a loan for operations, is one of the oldest schools in Milwaukee.

“And yet,” Freitag said, “it is a new ministry, providing the highest quality Lutheran education to 220 high-risk immigrant and minority students, of which 190 have English as a second language.”

Freitag observed that St. Martini Lutheran Church, which operates the school, “had no cash resources for the school, and currently no students are members of [the congregation].  But the congregation saw a need for ministry outreach in its community.”

LCEF matched the conference worship service offering of more than $8,000 as a gift to St. Martini Lutheran School.

Among other awards given at the fall conference, 11 Synod congregations from five districts were recognized for reaching the $1 million level in LCEF investments for the first time.  Also, 10 percent of each of those congregations’ members are LCEF investors.

“There is much good news,” said Freitag in his conference presentation.

“God continues to bless our efforts to serve the LCMS,” he said, adding that LCEF’s total assets “passed through the $1.5 billion level during July of this year” and that total assets through September stood at $1.543 billion.  Net income through September totaled $9.3 million — about the same as last year, Freitag pointed out.

“Loan activity as measured by loan approvals ran at a record level in 2006, closing at $296 million,” Freitag told the assembly.  “It is important to note, however, that organizational loan approvals were $232 million — below the previous high — while rostered church worker loans made up the balance, $64 million for the year.”

Freitag then turned his attention to the Synod’s Ablaze! movement.

“LCEF support for this initiative and for [LCMS President Gerald B. Kieschnick’s] vision [of] One Mission, One Message, One People is contained in three areas,” he said. They are:

Addressing the conference theme of “One People: Ablaze!,” Kieschnick laid out for attendees the desired characteristics of “One People” for the Synod, quoting Phil. 1:27.

“Whatever happens,” that verse reads, “conduct yourselves in a manner worthy of the Gospel of Christ.  Then, whether I come and see you or only hear about you in my absence, I will know that you stand firm on one spirit, striving side-by-side for the faith of the Gospel.”

“These words beg for the exhibition of attributes from the one people of the church,” Kieschnick said.

He then proposed the following seven characteristics “that I pray will be displayed and will mark our living together and working together as one people in the LCMS”:

“I dare say,” Kieschnick said after summarizing those characteristics, “when [they] are present, the conditions are right for the one people of God to be Ablaze! with the Gospel of Jesus Christ.

“In our Synod,” Kieschnick later observed, “it is possible for us to be Ablaze! as one people in this manner.  We have a vision that causes us to focus on those essentials that we hold in common in order to promote a unified focus for mission and the common good for our Lord and His Church.  This vision sets a course that recognizes that faith in action can be alive even as oneness continues to be fostered.”