Shepherd of the Pines Lutheran Church, Payson, Ariz., has received a $44,270 grant from Indianapolis-based Lilly Endowment Inc. to support its pastor and his family as they pursue studies in England later this year. 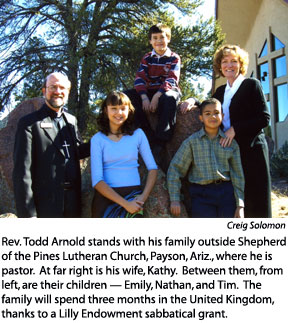 That grant makes it possible for the congregation’s pastor, Rev. Todd Arnold, his wife (Cathy), and their three children (Emily, Nathan, and Tim) to study in England for three months, starting this spring.

Rev. Arnold will study the life and works of Christian author C.S. Lewis at Cambridge and Oxford Universities, and serve as a mentor to pastoral students in the Lutheran seminary program at Westfield House in Cambridge.

While abroad, the Arnold family also plans to study botany and English history, and participate in a “literature tour” as part of the children’s home-school education.

Rev. Larry Bell of Mahomet, Ill., is set to serve Shepherd of the Pines while the Arnolds are away.

A news release from Lilly Endowment Inc. states that it “provides time for ministers to take a break from their daily obligations and gain the fresh perspective and renewed energy that a carefully considered ‘sabbatical time’ [of] travel, study, rest, and prayer can provide.”