“Love Completes the Mission” is the theme for this year’s “Armed Forces Sunday” observance on May 21, and resources still are available to help congregations remember military families and support the Synod’s ministry to the armed forces.

Nearly 45,000 Lutherans serve today’s military — “many of them deployed away from home and family and serving in harm’s way,” according to Rev. Mark J. Sc

hreiber, director of the LCMS Ministry to the Armed Forces.  “They are an important part of our Christian family, and we dare not forget them in their difficult hours.”

The Lutheran Church–Missouri Synod has provided ministry to military personnel since the Civil War, and for more than 60 years has conducted a “Ministry-by-Mail” program for those serving the military in far-flung destinations, providing them with free Christ-centered literature four times a year. 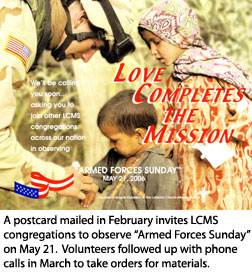 rmed forces ministry.  This year marks the 70th anniversary of the ministry, which, in addition to providing resources for those serving in the armed forces, sponsors four annual training conferences for LCMS military chaplains worldwide.

Visitors to the ministry’s Web site at www.lcmsworldmission.org/armedforces can download information on how to become a military chaplain; a list of “care package” items most useful to troops; a worship service that honors veterans; a history of Veterans Day; a copy of So Help Me, God!, the quarterly armed forces newsletter; a new brochure about the Synod’s armed forces ministry; a “Veterans Certificate”; resources for military chaplains; and “Military Prayer Guides” produced by Lutheran Hour Ministries.

Also available on the site are this year’s Armed Forces Sunday materials:

Ninety LCMS military chaplains — including 16 reserve and National Guard chaplains who have been called to full-time duty — currently serve U.S. troops worldwide.  Those serving in war zones include four in Iraq and one in Afghanistan.

In addition to those on active duty, the Synod’s roster of military chaplains includes 57 in the reserves, 36 in the National Guard, 26 serving the U.S. Department of Veterans Affairs, and 24 in the Civil Air Patrol.

As this Reporter was going to press, nearly 1,400 congregations had ordered materials for Armed Forces Sunday.