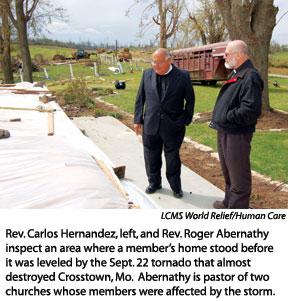 an F-4 tornado Sept. 22 that almost leveled the small down of Crosstown in Perry County, Mo., about 80 miles southeast of St. Louis.

The Synod office also gave a $3,500 emergency-relief grant for members of a Hawaii congregation who were forced from their home after the Oct. 15 earthquake hit. The state’s strongest quake in 20 years, it had a magnitude of at least 6.5 on the Richter scale, according to news reports.

Rev. Carlos Hernandez, director of Districts and Congregations with LCMS World Relief/Human Care, assessed the tornado damage in southeast Missouri and met with pastors and members affected by the storm.

This was the area’s second destructive tornado since May, when a tornado killed two people in St. Mary’s, just a few miles from Crosstown.

Hernandez stopped in Crosstown at historic Zion Lutheran Church, which served as a staging area for early relief efforts in the town.  That is despite the fact that the church building had so much roof and structural damage that worship services have been held at Salem Lutheran Church, Farrar, Mo.

Rev. Roger Abernathy, pastor of both Zion and Salem, and Rev. Thomas Handrick of Immanuel Lutheran Church, Perryville — the three congregations that received the $17,000 in grants –- praised the response of many Lutherans and others.

In particular, Hernandez said they were grateful to 127 students, almost the entire student body, from Saxony Lutheran High School in Jackson, Mo., who pitched in to do what they could Sept. 27 at Crosstown.

“They took a whole day off from school and the relief work out here became their classroom,” Abernathy said.

Hernandez rode with Abernathy down County Road 350 — a heavily-hit stretch where many members of the three Lutheran churches live.

“You couldn’t help but feel shock at the damage the tornado inflicted in this area,” Hernandez said.  For as far as the eye could see, anything man-made was utterly destroyed.  Most of the members living on this road have had to evacuate their homes.  Some farmers have lost their corn crops, machinery, and barns and other buildings.

Zion and Salem received an initial $12,000 grant to help nine member families — five who lost their homes to the twister, and the rest with extensive property damage.

For Immanuel, Perryville, a $5,000 initial emergency disaster-relief grant is being added to $4,500 left over from a World Relief/Human Care grant it received in May, to help seven families affected by the latest tornado.  Of those, one family lost its home.

Hernandez said that in addition to assessing financial needs, he “shared words of encouragement with pastors and members, prayed with them, and assured them of our help.

“This is probably the best help that we give to our LCMS folks after a disaster,” he added.  “They appreciate the financial assistance.  But more than that, it’s the fact that their church cares — their local congregation, as well as their Synod.”

The Oct. 15 earthquake with its epicenter on the island of Hawaii — also known as the Big Island –- did extensive damage to the homes of at least two LCMS families.

On Hawaii, Waikoloa Lutheran Church received the emergency-disaster grant of $3,500 to help Dave and Betty Sarasin, whose condominium there was declared uninhabitable from quake damage.

Noting that the Sarasins’ condo is on the ground floor of a three-story building, Hernandez said that Rev. Lester Seto, Waikoloa’s new interim pastor, told him that if “we were to walk into their unit today and look up, we would see the sky.”

The grant for the Sarasins will help them with temporary housing and with making mortgage payments on their damaged condo, according to Seto.

Although no grant assistance had been requested at the time this issue went to press, Hernandez said that Rev. Milton Fricke, pastor of Emmanuel Lutheran Church at Kahului, Maui, told him about damage incurred by one of its members.

Fricke said that a huge boulder crashed through the roof of Virginia Ka’ai’s home after it was shaken loose from the mountain above the house.  He continued that the boulder, breaking into pieces as it hit the home, took out a support pillar and sent a roof beam crashing onto the bed where Ka’ai’s grandson had lain only moments earlier.  He said that about a third of the boulder came to rest at the foot of that bed.

To donate toward disaster-response efforts, make checks payable to LCMS World Relief and mail them to LCMS World Relief, P.O. Box 66861, St. Louis, MO 63166-9810.  Write “Tornado Response” or “Earthquake Relief” on the memo line.  Gifts also may be donated securely online at http://worldrelief.lcms.org or via telephone by calling (888) 930-4438.

For alerts about LCMS World Relief disaster-response efforts anywhere worldwide, subscribe to Disaster News, a free e-News service of the Synod.  At http://www.lcms.org, click on “e-News” and follow directions on the screen.