Nine Concordia University students from three U.S. campuses who were taking part in an archeological excavation in Israel have left the country because 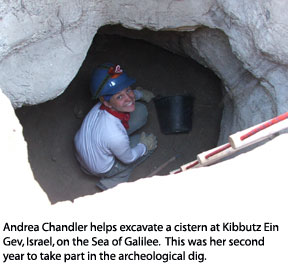 of rocket blasts in Tiberias — seven miles across the Sea of Galilee from where the students were working.

The students were among a group of 30 who left the United States July 2 for a four-week archeological excavation led by Dr. Mark Schuler, a professor of theology at Concordia, St. Paul.  The group was working at an excavation begun in 1999 of the Byzantine city of Hippos at Kibbutz Ein Gev on the Sea of Galilee.

Following three rocket blasts on July 15, the students were evacuated to Jerusalem, then Tel Aviv.  As of July 17, all nine students had secured flights to the United States and at least one already had arrived stateside.  All were expected to leave Israel no later than July 19.

Evacuee Andrea Chandler of Fort Collins, Colo., and a senior art student at Concordia, St. Paul, said the group could see Tiberias from where they were and there were times she felt “a little nervous … because of being able to hear artillery and planes constantly.”

Chandler, 21, answered questions from Reporter about her ordeal via 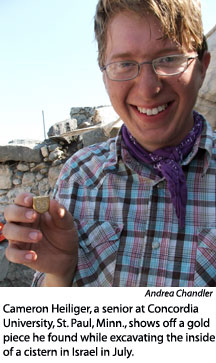 e-mail while waiting for her flight July 17 at Ben Gurion Airport in Tel Aviv.

“It’s amazing to think of how long this [conflict] has been going on,” Chandler said.  “One of my thoughts has been that I came to see the land where Jesus came, and while here, I also experienced part of the reason He had to come.”

She described the situation as both sad and scary.

“For us, the danger got too close and our professor decided to evacuate us,” she said.  “We leave the country and go home to the safety of American soil.  But for the people here, there is no evacuation.  They are home.  And it’s not safe for them.”

When the rockets hit Tiberias, the local people “continued swimming on our side of the lake,” Chandler said.  “Kids were outside playing, because what else could they do?”

“There is a lot of irony in this country — God’s promised land so full of hatred, tension and war [yet] signs everywhere saying ‘Peace be with you’ in a place that is far from being defined as peaceful.”

Even though she and the other students only stayed for two of the four-week excavation, “it was an amazing two weeks,” Chandler said.  “There is so much I learned … that I don’t regret coming at all.”  She said she would like to return someday.

Another evacuee, Cameron Heiliger, a senior at Concordia, St. Paul, from Billings, Mont., said he and other 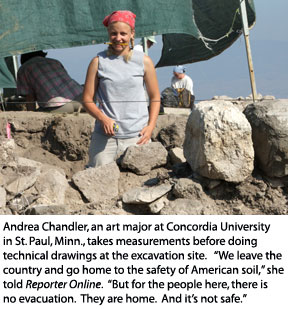 s from the excavation had been shopping in Tiberias the day before the city was shelled.  Eating lunch the next day back at the excavation site, he could hear the explosions, he told Reporter via e-mail from Tel Aviv.

“I never felt in danger at the dig site or at the kibbutz where we stayed,” Heiliger said.

But the experience has made the conflict more real for him.  “Being over here has shed new light on the situation and has given it a ‘face,'” he said.  “That face is the people with whom we lived on the kibbutz and those in Tiberias who were shopping.”

Those evacuated were from three schools: