Registration fees are set for the 2007 LCMS National Youth Gathering, and plans are under way for a first-time adult component of the Gathering.

is $235 per participant — up $10 from the registration fee for the last previous Youth Gathering, which was 2004 in Orlando.

“The Gathering has worked to keep cost increases to a minimum,” said Rev. Terry Dittmer, director of LCMS District and Congregational Services — Youth Ministry, which sponsors the Gatherings.

Dittmer said the minimal increase is “even in light of the shift from New Orleans,” where the 2007 Gathering was originally planned to occur.  However, because of the devastating effects of last year’s Gulf Coast hurricanes on that city, planners announced last fall that the Gathering was going back to Orlando.

Dittmer also commented about the goals of national Youth Gatherings and evaluating their “format and purpose.”

He said that through the Gatherings, which have involved more than 200,000 participants since they began in 1980, the Synod has provided opportunities for “youth and adults to boldly come together in the name of Jesus Christ, rejoice in the fellowship of their church, and be affirmed and nurtured as God’s people through Word and Sacrament.” 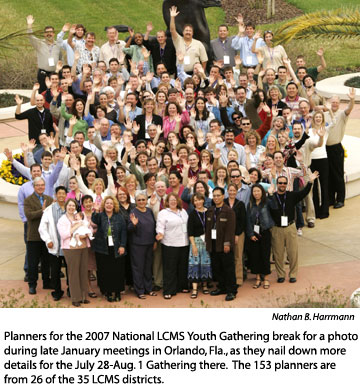 “The Gathering has been a viable, significant program for youth ministry in the LCMS for many years,” Dittmer said.  “The intent is to continue to share a strong, necessary program with the Church in the years to come.”

The Adult “parallel” program is open to any LCMS adult, age 25 and up.

Information on the adult component is available at the 2007 National LCMS Youth Gathering Web site (click on “2007 Adult Gathering” under “Main Menu,” and then on “About the Gathering”).

Among points made in the Web site’s “FAQs” section about that component are that it:

The Web site notes that planners are continuing to work on “every aspect of the [Adult] Gathering program — from Bible study to mass events, recreation, servant events, informative speakers, concerts, and more.”

The site invites adults to participate in a series of monthly polls there, which “will directly impact how planners approach the [adult] Gathering.”

Registration materials, including more information on both the 2007 Youth Gathering and the parallel adult component, will be mailed to all Synod congregations in late August.

Registration for the Gathering and the adult program opens later this fall.

Another new development for the 2007 National Gathering program is that it “will directly involve all participants in serving experiences in the Orange County Convention Center or surrounding community,” said Gretchen Jameson, communications manager for the Gatherings and associate director for Youth Ministry — Communications.

That, she noted, is in contrast to Gatherings in previous years, when Servant Event spaces were limited.

“Projects will include opportunities for youth to impact the host city,” Jameson said, “as well as hurricane-impacted areas along the Gulf Coast, from Florida to Texas.”