Thirty of the Synod’s 70 or so long-term missionaries who are beginning new terms this fall aren’t new — they’re “old hands” on the overseas mission field who have decided to extend, or continue, their service.

That’s a new phenomenon — and a record — for LCMS World Mission, according to Placement Counselor Erin Alter.  Last year’s crop of long-term m 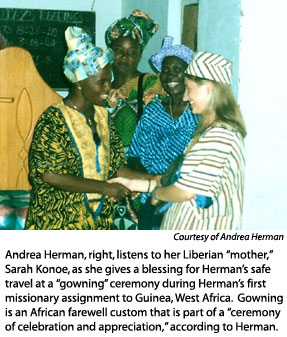 issionaries included only 15 who extended their service, she said.

“It’s really exciting that they love their service … and they don’t want to leave yet,” Alter said of this year’s group.  “So they’re continuing on for another year.”

Most of this year’s “repeat” missionaries are long-term volunteers who raise their own financial support from sponsoring congregations.  Six are new “career” missionaries who are serving “calls” from LCMS World Mission and are on the board’s payroll.  Some are extending their service in their previous mission countries; others have accepted assignments to new countries.

“These missionaries are an important part of the worldwide Ablaze! movement to reach 100 million people with the Good News of Jesus by 2017,” said Roegner.  “I thank God for them, but I also pray that He would move every Lutheran to be part of Ablaze!, sharing the Gospel with people across the globe and with the people they meet every day, right where they are.”

The orientation was held at the Oswald Hoffmann School of Christian Outreach, co-sponsor of the annual missionary-training event, on the campus of Concordia University, St. Paul, Minn.

Andrea Herman of Anoka, Minn., completed nearly a year-and-a-half of volunteer missionary service in the forest 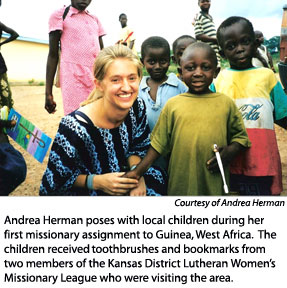 Herman, 31, had a lifelong love for Africa and considered her first missionary stint as “a great opportunity to see if God might be calling me into full-time missionary service.”

That first experience, working among many different people groups, was “life changing,” she says.

“On one hand, I experienced some of the greatest joys of my life: watching a young Muslim woman daily seek the truth, understanding new facets of God’s character from my brothers and sisters in Christ in Guinea, and experiencing Lutheran worship — West African style!,” she told Reporter via e-mail.

There also were challenges, she said, particularly with new languages and unfamiliar cultural rules — and, in trying to meet the widespread needs of the surrounding refugee community.

“Despite the challenges, it was tremendously rewarding,” Herman said.  “I remember being overwhelmed by the loving welcome and hospitality I received from strangers wherever I went.  There were often invitations to ‘come eat,’ even during the hungry season when food was scarce.

“My experience in Guinea taught me much about what it means to ‘love your neighbor,’” she said, and “strengthened my faith more than any other thing I’ve ever done.”

At 22, Katrina “Kat” Schaff of Crookston, Neb., is a new graduate of Concordia University, Seward, Neb., and a first-time missionary.  Schaff, the younges

t of nine children, began her two-and-a-half-year assignment to Japan in late September.  Two older siblings — sister Tamara and brother Andrew — also served as missionaries and influenced her desire to serve, she said.

“When I was little, Will and Tamara [Schumacher, who served 10 years in Botswana, Africa] would visit and teach us Christian songs in Setswana [an African language], and that is what started my love of languages,” Schaff told Reporter via e-mail.  Brother Andrew, who serves with his wife, Noel, in Taiwan, introduced her to a group at Concordia, Seward, called “Mission Minded Students,” which got her involved firsthand in mission work.

“All of a sudden doing mission work did not seem like such a far-fetched thing,” she said.  “As I talked to various people and [heard about] their experiences in mission and took part in a few mission trips myself, my love of spreading the Gospel grew.  When I graduated, I knew that I would serve God as a missionary overseas.”

Schaff, who spoke with Reporter before she left for Japan, said she was excited about going overseas.

“I can’t wait,” she said.  “This is the big event that will start the new page in my life.”

Herman said she wouldn’t hesitate to encourage others to consider missionary service.

“It is an amazing adventure where you can’t help but learn more about God, learn more about yourself, and gain a broader perspective on the world and its desperate need for Jesus,” she said.

For more information about long- and short-term (less than six months) missionary service, visit the Web site www.lcmsworldmission.org/service or contact an LCMS World Mission placement counselor at (800) 433-3954 or mission.recruitment@lcms.org.