Seminary`s Siemon-Netto: get involved, serve others

Journalist, college professor, and seminary scholar-in-residence Dr. Uwe Siemon-Netto has a message for all Lutherans, especially laypeople: strive to become what Martin Luther called “God’s cooperators” in this world — get involved and serve others in your secular professions.

He also has a message for fellow journalists: learn about the importance of religion in the world and ask questions about the religious beliefs of the people you are writing about so you can interpret and, to some extent, even predict their behavior.

In an effort to get those messages out, Siemon-Netto is wearing two hats in The Lutheran Church–Missouri Synod:

The German-born Siemon-Netto, who marks 50 years as a journalist next month, has served as a forei 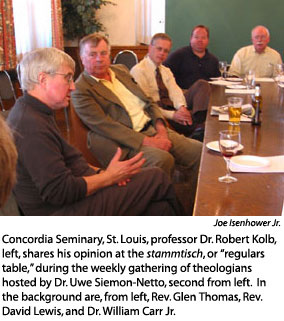 gn correspondent whose stories included construction of the Berlin wall, the assassination of President John F. Kennedy, the U.S. civil rights movement, and the Vietnam War.  He served as a managing editor in Germany and, lately, as religious affairs editor of United Press International in Washington, D.C.

He also is a research scholar at the Institute for Religion and World Affairs, Boston University.  He holds a master of arts degree in theology from the Lutheran School of Theology, Chicago, and a Ph.D. in theology and sociology of religion from Boston University.  Concordia Seminary, St. Louis, awarded him an honorary doctorate in 2004.

As a journalist and theologian, Siemon-Netto says he has come to believe that there is “a huge chasm between journalism and Christianity,” primarily because many of today’s journalists see themselves as “wanna-be prosecutors and intellectuals” rather than servants with a “calling to keep people informed.”

“Journalists are generally ignorant about religious matters,” he says, and during interviews “never ask the ultimate question, ‘What is it that makes you tick?'”  In these days of terrorism and culture clashes, very often the answer to that question is religion, he says, and the more reporters know about religion, the more accurate — and informative — their stories will be.

Likewise, many pastors can be “egregiously goofy in their dealings with the press,” he said, and need to become more comfortable — and proficient — in getting their message to the media.

He is hoping Concordia-Bronxville’s Center for Faith and Journalism will serve as a liaison between the two, he said.

While Siemon-Netto will occasionally spend time in Bronxville, most work-weeks will be devoted to the St. Louis-based Concordia Seminary Institute on Lay Vocation.  He began teaching his first course there last month, a graduate-level class titled “Faith, Conflict, and the Media.”  He described the three-hour class as more of a “think tank” to explore how the church can best operate during a national crisis or catastrophe.

For example, if there is no gasoline and a shortage of food, medicine, and other basic necessities, how can congregations best respond to the needs of their members, and how can ministers provide pastoral care and deal with the media to get their message out?

Discussion was lively, according to Siemon-Netto, and “we got so excited we didn’t even break” during the three-hour session.  Ideas generated during the course will be shared with the church at large, he said.

Just as congregations are called to reach out beyond their walls, all Lutherans have “a calling to serve our neighbors in our secular vocations,” the so-called “left-hand kingdom,” he said.

“Martin Luther said, ‘There is no more noble work than the (secular) vocation … God places on each and everyone, which he (the Christian) is to accept gladly in order to serve his neighbor faithfully.'”  If Christians do this out of love for their neighbors, they render the highest service to God, Luther said.

Secular vocations include “the divine obligation of media consumers to inform themselves” by receiving, digesting, and discerning the news from newspapers, television, Web sites, and other sources, according to Siemon-Netto.

Becoming informed and knowledgeable “is our God-given task,” he said.  “It is, in terms of Lutheran theology, an act of love because it serves our fellow man whose well-being we must consider in our political and other decisions.

“If we do, we render the highest possible service to God,” he added, paraphrasing Luther.

“We live in a world that cries out for sound Lutheran doctrine — the doctrine of two kingdoms,” said Siemon-Netto, and he encouraged Lutherans to “reflect and get involved — to fully engage the world, without succumbing to its ways, though!”  To sit by and do nothing is “wrong,” he said.

Siemon-Netto is using a number of avenues to reach laypeople — and church workers — with his message of “serving others.”  Each Monday, between 5 and 6 p.m. Central time, he is featured on the “Issues Etc.” program on KFUO-AM 850, the Synod-owned radio station located on the Concordia Seminary campus.  “Live” and archived broadcasts of those shows are available on the KFUO Web site.

Siemon-Netto also plays host to a weekly gathering of theologians at the stammtisch, or “regulars table,” in a meeting room at his office on the seminary campus.  At the Tuesday afternoon gatherings, participants enjoy a beer or a glass of wine and take part in theological discussions.

For more information about the Concordia Institute on Lay Vocation, or any of th