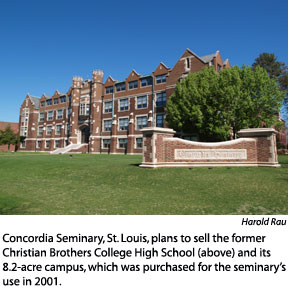 Over the past year, the seminary’s Board of Regents, president, vice presidents, and deans have studied and discussed how the seminary can fulfill its mission and respond to future opportunities.

“All of our discussions have focused on how the seminary can serve church and world most effectively,” said President Dale A. Meyer.  “After careful study, it became clear that the historic campus offers the most efficient and cost-effective possibilities for the seminary’s future.”

Michael Louis, the seminary’s vice president for financial planning and administration, added that the decision was primarily one of fiscal stewardship.

“We want to operate Concordia Seminary as efficiently as possible, not only to exercise the best possible stewardship of the gifts entrusted to our use, but also to be able to respond to future needs as they arise,” Louis said.

Meyer said the CBC purchase was “a good strategic decision that began a beneficial internal process of thought and discussion related to the future role the seminary could play in the church,” according to a seminary news release.

“The purchase served as a catalyst for Concordia Seminary to consider new and exciting opportunities to provide theological leadership in church and world,” he said.  “These considerations likely would not have occurred without the CBC purchase.”

Meyer also praised the decision to purchase CBC from an economic standpoint and for the control it gave the seminary regarding the property adjacent to its campus.

“Property in Clayton, one of the most desirable suburbs in the St. Louis region, which also features Clayton Road frontage, is never a bad investment,” he said.  “The purchase also allows us to control who will be our neighbor for many years to come.  That may be one of the most often overlooked benefits of the CBC purchase.”

Meyer thanked the Schwan Foundation for its “leadership and generosity” and seminary leaders for their “courage and direction” in purchasing the property.

Meyer is overseeing the completion of strategic and master planning related to the seminary’s original campus, and has appointed Executive Vice President Andrew H. Bartelt to lead the effort.

Bartelt declined to provide details but said plans “will likely include new construction, as well as the renovation, expansion, and improvement of existing facilities on the historic campus.”