Volunteers still are needed to help Hurricane Katrina victims rebuild their homes — perhaps more than ever — say Lutherans involved in the effort.

John Coyle, who has been directing a Lutheran Disaster Response (LDR) camp for cleanup volunteers in Bil 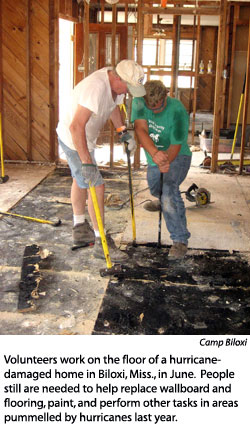 oxi, Miss., since last September — just two weeks after Hurricane Katrina slammed into the Gulf Coast — says volunteers there have gutted and rebuilt 300-plus homes to date.

But LDR case files list 3,000 more “unlivable” hurricane-damaged homes in the Biloxi area, according to Coyle, who says, “We could work at this pace for three more years and still not be done.”

LDR, a collaborative ministry of the LCMS and the Evangelical Lutheran Church in America (ELCA), has organized housing for cleanup volunteers at a dozen sites in Alabama, Louisiana, Mississippi, and Texas.  In the past year, 15,000 volunteers have spent 600,000 hours cleaning and rebuilding hurricane-damaged structures, according to LDR.

In Biloxi today — a year after the storm — local contractors still are swamped with jobs, Coyle says, and the number of workers available to help replace wallboard and flooring, paint, and perform other tasks has fallen dramatically.

Just two months ago, LDR’s “tent city” for volunteers — dubbed “Camp Biloxi” — was housing more than 300 people.  Now there are fewer than 80.

Even if homeowners receive enough insurance money to purchase rebuilding materials, it’s often hard — or impossible — to find enough hands to do the work, says Coyle.

Many were underinsured to begin with, but even those with flood insurance “probably didn’t get enough money to rebuild,” so the situation is “a real catch-22,” he said.

But “getting the [workers] down here is the biggest thing.”

Volunteers have come from all over the country and from many different denominations to help, living at Camp Biloxi for a few days to several months.

Accommodations at the camp include air-conditioned and heated tents, trailers, and modular units with bunk beds, showers, and a dining hall.  Also available are parking spots with electrical hookups for campers and RVs.

A local Lutheran told Scudieri that “the thing that citizens of Biloxi fear most is another hurricane — not for the destruction it might bring, but because if it struck somewhere else it would drain volunteers from the present work,” he said.

The volunteers — who come mostly in groups from Christian denominations — are “critical” to the area’s renewal, according to Scudieri.  “Over and over again I heard, ‘If it weren’t for the volunteers from the churches, we would not have a home again,’” he told Reporter.

Willis Barras lost his entire house when a “wall of water” swept it off its concrete-block foundation.  The two-bedroom home he and his wife had lived in 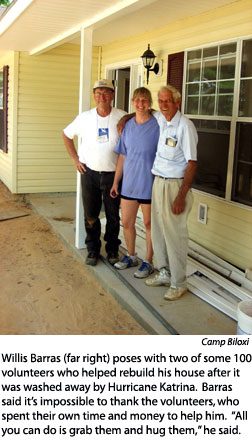 since 1954 — with a huge carport and patio where they used to hold “shrimp boils” for family and friends — was, he said, “100 percent gone.”

Barras, 75 and single since his wife died four years ago, last month moved into his new house — a home built by church and other volunteers from Pennsylvania, Minnesota, North Carolina, Massachusetts, Michigan, California, Ohio, West Virginia, Maryland, Missouri, and Georgia.

Barras can rattle off their home states because he took pictures of each group — more than 100 people in all — for a photo album he is putting together.

“Everybody who comes says ‘this is one of the prettiest houses I’ve ever seen,’” Barras said.  “[The volunteers] really did a beautiful job.”

One of them — a member of Good Shepherd Lutheran Church, Biloxi — is finishing up building Barras a gazebo so he can resume his shrimp boils.  Barras says the first party he throws will be for the volunteers.

He also wants them to know that he has an extra bedroom for them whenever they’re in town.

He is still amazed, he said, that strangers would spend their own time and money to travel to Biloxi to help him.

“How do you thank them?  There’s no way,” Barras told Reporter.  “All you can do is grab them and hug them — and that’s what we did.”

Barras said he’s glad his wife, June, didn’t have to see their house destroyed by the storm.  “But I’d love for her to see this new house,” he said.

Scudieri said he was impressed by the volunteers, who aren’t discouraged by the overwhelming task at hand but approach their work “one house, one family, at a time.”

Some of the volunteers stayed for months.  “They couldn’t leave,” he said.  “That was the most powerful thing — to see the love of these people.”  (Click here for related story.)

Volunteers should be at least 18 years old.  Especially needed are those with skills in carpentry, electrical work, drywall installation, plumbing, concrete, and floors, he said.