'Future' for outreach 'is now,' Kieschnick says at installation 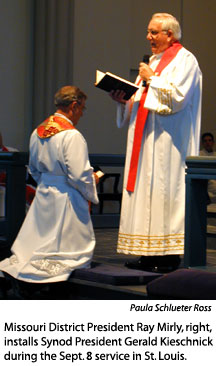 hostile” toward Christians — God is providing “far-reaching opportunities” for evangelism, Synod President Gerald B. Kieschnick told newly elected executive staff and members of 16 boards and commissions minutes after they were installed into office Sept. 8.

The installation for the 105 leaders who are beginning new terms of office took place during a morning matins service at the Chapel of St. Timothy and St. Titus on the campus of Concordia Seminary, St. Louis.

In his remarks to worshipers, Kieschnick said he is “more convinced than ever” that God is calling The Lutheran Church–Missouri Synod “to an ever-increasing role of leadership in worldwide Christianity,” and he invited those beginning new terms to dream of their church body as one that is faithful to God’s Word, “forward-looking and fruitful” in mission and ministry, and outreach-focused.

He encouraged them to “dream with your eyes wide open” to see “fields ripe for harvest,” “doors of opportunity,” and “the undeniable power of God.” 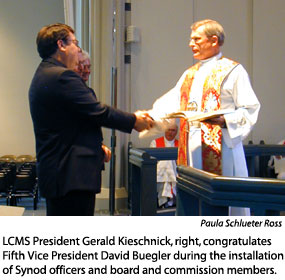 Christ alone as the Savior of the world resounds above all other sounds.  Dream with a vision where as One People we are striving side-by-side for the faith of the Gospel with an aligned focus and a collaborative spirit of cooperation.”

Those dreams are coming true today, he said, “and will be realized more and more as every person in the LCMS catches the vision of reaching out with the love of Christ at every opportunity.”

He shared the story of Earlene Wagner, a music minister at Trinity Lutheran Church in Oregon City, Ore., who saw neighborhood children going door-to-door in the summer, looking for something to do.  Wagner invited them to her home for a two-day “Backyard Bible Club,” where they learned about Jesus through crafts, songs, snacks, and Bible lessons.

“You don’t have to go far to share the Gospel,” Kieschnick said, “and sometimes opportunities come to you and knock on the front door.”

That story, he said, illustrates that “the future of the LCMS is happening right now.”  It is “a future of mission 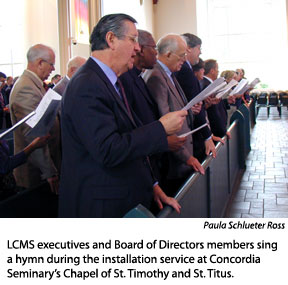 like this church body has never seen before,” one in which “Lutheran Christians are sharing the hope of Christ that is within them with other people.”

The Synod president called himself “an imperfect leader, whose shortsightedness and shortcomings, liabilities and limitations are obvious to many,” … “an ordinary man who, like each of you, has been blessed with extraordinary grace.”

He asked those being installed for “your prayers, your support, and your walking in unison with me in response to the love of Christ.”

“Dear friends,” he concluded, “since God so loved us, we also ought to love one another.”

In his sermon at the installation service, Dr. Loren Kramer, president emeritus of the Synod’s Pacific Southwest District and chairman of the LCMS Commission on Theology and Church Relations, asked those beginning their service to consider:

Kramer urged them to “see with God’s eyes” in order to “see His plan” for their service, and cautioned them not to compete with one another 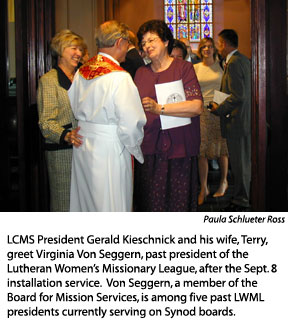 but to “complete each other.”

“When each person does what they are gifted and called to do, the whole body is blessed and functions effectively so that God’s work gets done,” he said.

Kramer called service to the church “a high honor and a holy obligation,” and said church positions are not about prestige but are about service.  He encouraged those being installed to follow Jesus’ example of servant leadership.

“Let His mind be your mind.  Let His attitude be your attitude.  Let His will be your will,” he said.

He urged them to act not as “thermometers,” simply gauging the climate of the church, but as “thermostats,” helping to create “a healthy climate in which God’s work gets done.”