Laurence E. “Larry” Lumpe, president of the Board of Governors of Concordia Historical Institute (CHI), Nov. 8 received the institute’s Distinguished 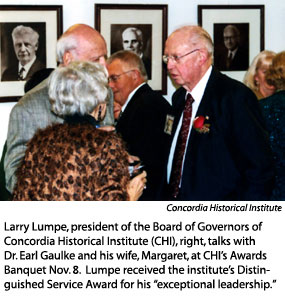 Lumpe, who also served as CHI’s vice president for nine years, was presented with the institute’s highest honor for his “exceptional leadership.”  Among his current duties, Lumpe serves as development officer for the Museum and Building Expansion Project, which plans to open an LCMS museum at the International Center in St. Louis.  The museum is expected to be completed next year.

Also presented at CHI’s 33rd Annual Awards Banquet, held on the campus of Concordia Seminary, were Awards of Commendation for 16 works published in 2006.

By category, the honorees are:

CHI is accepting nominations for recognition at next year’s awards ceremony.  The institute, which is the Synod’s Department of Archives and History, is located on the campus of Concordia Seminary, St. Louis.  To download an awards nomination form, visit CHI’s Web site at http://chi.lcms.org.