Many LCMS members speak out and take action over concern for the health of today’s American family.  But the Synod also must continue to extend a hand of support overseas where the family faces even greater challenges, says 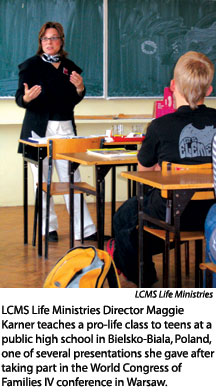 “We have the resources, the capabilities, and the solid doctrine to be a guiding force globally, not just domestically,” said Karner, who joined more than 3,000 representatives from 60-plus nations at the World Congress of Families IV, May 11-13.  “Churches in other countries are looking to us for leadership and guidance.”

While LCMS members have served behind the scenes at these global gatherings, Karner’s participation marked the first time the Synod was represented in an official capacity.  The conference is sponsored by the Howard Center for Family, Religion, and Society to foster an international, pro-family network.

In addition to the Synod, another first-time conference attendee was the Evangelical Lutheran Church of Ingria in Russia, an LCMS partner church.  LCMS Life Ministries, through funding provided by LCMS World Relief/Human Care, sponsored the participation of two leaders from a Russian Lutheran counseling center.

LCMS Life Ministries helped the Russian Lutherans establish the Hope Family Counseling and Crisis Pregnancy Center in St. Petersburg to combat the country’s staggering abortion rate.  The average Russian woman has as many as eight abortions in her lifetime, Karner said.

Such grim statistics fuel an issue that was a major conference concern: Europe’s plummeting birthrates.  “Most European countries do not have replacement rates (sufficient birth rates to replenish populations),” Karner said.  She cited abortion and shifts away from marriage and large families as contributing factors.

High on the conference agenda were strategies to encourage elected officials and governments to be more respectful of the sanctity of life.  While Americans routinely express their opinions and work to change legislation, such activism remains unfamiliar in many Eastern European countries where democracy is still relatively new, Karner said.

To help spread the message that “every person can make a difference” in the pro-family movement, Karner spent the week following the World Congress of Families conference speaking to hundreds of Poles in churches, public schools, and town halls.  Her lectures covered a variety of pro-life issues and were arranged by the Lutheran Church of the Augsburg Confession of Poland.

Karner was mindful that she was speaking to people who live not that far from countries that allow euthanasia and routinely follow this practice without patient consent (Holland and Belgium) and a country to which “suicide tourists” travel in growing numbers to end their own lives (Switzerland).

At a Polish school a few miles from the infamous Nazi concentration camp Auschwitz, the LCMS Life Ministries director spoke with students who asked about end-of-life and bioethical issues.  “It was very personal for these kids.  All of them know of someone in their family or life who was persecuted or exterminated during World War II.  They clearly understand the dangers of letting others decide when someone else’s life is ‘unworthy to be lived,’” said Karner, referring to Hitler’s position toward Jewish lives.