As he looks forward to his third term as president of The Lutheran Church—Missouri Synod, Dr. Gerald B. Kieschnick says a half-dozen items will top his priority list for the next three years. 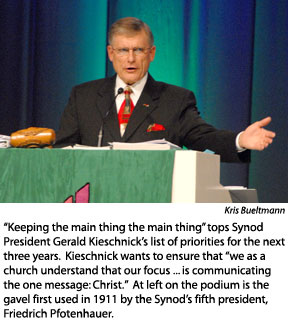 3rd Regular Convention of the Synod, July 14-19 in Houston.

The theme of the six-day convention was “One Message—Christ! His Love Is Here for You.”

Kieschnick said he wants to ensure that “we as a church understand that our focus is mission, our focus is communicating the one message: Christ.  “My sense is there are times when we get so bogged down in other matters we forget why we’re here,” he said.

Kieschnick added that other items at the top of his list include recruitment and retention of church workers, compensation for church workers, stewardship renewal, Synod solidarity, “the place of God’s grace among us,” and addressing structural issues in the Synod.  He also identified as high-priority items offering a faithful and courageous confessional witness to an increasingly non-Christian society and responding to requests for help from overseas church bodies.

Addressing the Synod’s structure may be the topic of a special convention in 2009. Delegates approved a resolution directing Kieschnick to meet with the Council of Presidents within 90 days of the close of the 2007 convention to determine if such a gathering is necessary.  In making that decision with a two-thirds vote of the district presidents, Kieschnick is also to consult with the Synod’s other officers, its Board of Directors and seminary presidents, and the Commissions on Theology and Church Relations and Constitutional Matters.

After the resolution was approved, Kieschnick expressed his appreciation for the “charitable manner” in which the delegates addressed the issue.

Other items adopted by the convention included resolutions to support the revitalization of at least 2,000 LCMS congregations by 2017, establish alta 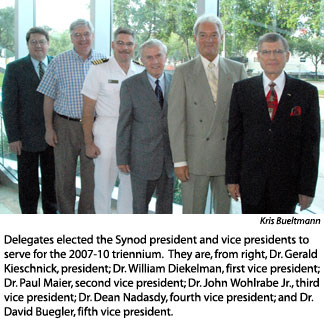 r and pulpit fellowship with The American Association of Lutheran Churches, establish a “Specific Ministry Pastor Program,” and clarify the relationship between the Synod’s Board of Directors and its Commission on Constitutional Matters.  The delegates also adopted resolutions to affirm the Synod’s dispute-resolution process, require annual Fan Into Flame reports, encourage stewardship renewal, and encourage congregations to abide by “faithful communion practices by practicing close(d) communion.”

“While most resolutions were not adopted by 100 percent, the overwhelming majority of them were adopted by a strong, high percentage of affirmative votes, many in the 80-percent-plus or 90-percent-plus range,” Kieschnick said.

On the opening day of the convention, Kieschnick was elected on the first ballot to a third term as the Synod’s president.  He received 52.3 percent of the votes.  Other candidates on the ballot were Dr. William R. Diekelman, of St. Louis; Rev. Daniel Preus, also of St. Louis; Dr. Wallace R. Schulz, of Augusta, Mo.; and Dr. John C. Wohlrabe Jr., of Virginia Beach, Va.

In observing that he will continue to make the recruitment and retention of church workers a high priority during the next triennium, Kieschnick noted that the Synod is blessed with quality people.

“Every congregation I visit, every district pastors’ conference I attend, I am j 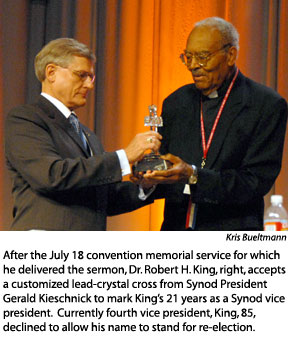 Kieschnick also noted that adequate compensation is essential in any effort to recruit and retain workers.

“I am really encouraging congregations and districts to heed what the Scriptures say: ‘The laborer is worthy of his hire,’” Kieschnick said.  Being able to compensate church workers appropriately goes hand-in-hand with a third major objective — a stewardship renaissance, Kieschnick added.

“Our people are richly blessed.  When one sees that the average LCMS member contributes two-and-a-half percent to church and to charity, the question needs to be asked, ‘Excuse me, what happened to the tithe?’ The tithe is not an anti-biblical concept.”

In a Gospel-focused perspective, “our gifts of love and our financial gifts are our response to God’s love for us in Christ,” Kieschnick said.

Kieschnick also noted that another priority looms large as each day of his life passes: Helping the LCMS articulate its confession in a culture increasingly influenced by non-Christian religious bodies.

Now, near the end of the first decade of the 21st century, Kieschnick said we are coming face-to-face with the reality that our challenge is not only to be an orthodox Christian church body in the midst of a collection of heterodox Christian bodies, “but to be an orthodox, confessional, and evangelical Christian church body in the midst of a culture and context that’s full of religious bodies, many of which are non-Christian, that are growing a whole lot faster than any Christian church — Mormons, Muslims, and atheists, to name a few.”

The playing field has changed, Kieschnick observed.  “Our challenge is not just how we refute the incorrect teaching of heterodox Christian churches, as important as that is. While we don’t want to stop doing that, our major priority is not sitting back and letting non-Christians have the microphone everywhere we go, but instead standing up as a confessional church body and faithfully and courageously articulating our confession.  Our confession must be heard.  It can’t be stuffed in our pocket.