met here March 16-18 in an ongoing effort to unite into one Liberian Lutheran church body.

Leaders from LCMS World Mission, the Synod’s African Immigrant Ministry, and two LCMS partner churches in Africa attended the three-day conference to lend their support to the unity effort.

“My reason for coming was to encourage this ‘Road Map to Unification,’ and, of course, to express my joy for what God has done in Liberia,” said Dr. Robert Roegner, executive director of LCMS World Mission.  The “Road Map” is a plan developed by Lutheran leaders in Liberia to move toward unification.

“Even though Satan attempted through war to destroy a country and a church, God made something very good out of something that was terrible,” Roegner said.

Roegner was a missionary among the Kisi people in Liberia from 1981 to 1990.  He and Dr. Paul Mueller, also formerly a missionary in Liberia and now regional director for Africa with LCMS World Mission, helped develop the Evangelical Lutheran Church Liberia Synod, one of the four groups in the unification effort.  Its leader is Rev. Robert Nyumah, a Kisi tribesman who originally was trained by Roegner.

“We want to depopulate hell and populate heaven,” Nyumah told the conf 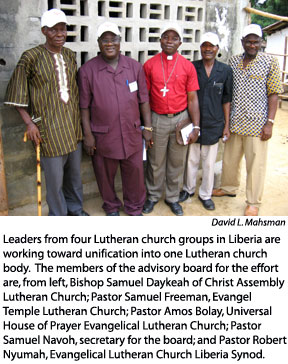 The other three groups are:

Together, the four Lutheran groups have about 400 congregations, several dozen elementary schools, a junior-high school, and a high school.

According to the “Road Map,” next steps are to verify the number of congregations and members of the four groups; prepare and adopt, through referendum, a constitution; register a new church with the government; and hold a national convention that will bring d 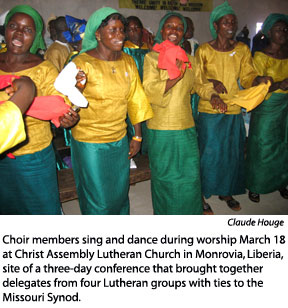 “One highlight of the conference was watching the Liberian leadership team work in a way that reflected great respect, appreciation, and brotherly love for one another,” commented Dr. David Erber, area facilitator for English-speaking West Africa with LCMS World Mission.

Roegner spoke to the conference around the Missouri Synod’s vision, “One Mission, One Message, One People” and invited the Liberian Lutherans to join the Ablaze! movement to reach 100 million people with the Gospel by 2017.

Commentary: Two LCMS members in Congress -- what does that tell us?