The Ablaze! initiative to share the Gospel with 100 million people worldwide by 2017 is “one of the best ideas that has emerged from The Lutheran Church–Missouri Synod,” according to Rev. 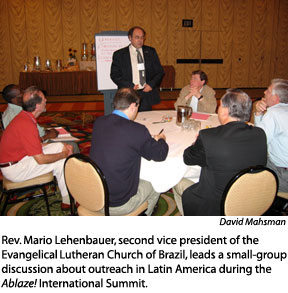 Lehenbauer, one of 22 LCMS partner-church representatives who met July 20-22 in Houston to discuss the evangelism effort with LCMS World Mission staff, added that his church body has its own Ablaze! goal — to share the Good News with 10 million people over the next 10 years.

The Brazil church reached 70,000 people last year, Lehenbauer said, by promoting the effort among its 230,000 members.  Ablaze! is known in Brazil’s Portuguese language as Aquecendo Corações or “Warming Hearts,” and its purpose is “to warm the hearts of people,” he said.  “We want to involve all our churches to have their hearts in mission, to share the Gospel.”

The “Ablaze! International Summit,” which followed the LCMS national convention, was the second such gathering of confessional Lutheran church leaders worldwide.  The first was held in conjunction with the Synod’s previous convention in 2004 in St. Louis.

The event was designed to bring the farflung church-body leaders together to share news about their evangelism efforts, ideas for reaching others for Christ, and

opportunities for ministry.  Presentations and discussions focused on four “case studies” relating to mission expansion: Lutheran schools in Africa, urban ministry in Brazil, immigrants and refugees in Germany, and seminaries in India.

Dr. Allan Buckman, chairman of the steering committee that organized the event, said participants “were very responsive and were fully engaged in the consideration of each of the case studies.”

The International Summit, Buckman added, “has emerged as a key event in the ongoing international Ablaze! effort.”

Dr. Paul Kofi Fynn, president of the Evangelical Lutheran Church of Ghana, West Africa, led the case-study discussion on Lutheran schools.  “We have been involved in Ablaze! right from the word go,” Fynn told Reporter.  Although evangelism “is not something new,” the summit gathering of international Lutheran leaders is “a good idea,” he said, “to re-emphasize Ablaze! and to reaffirm our commitment to the proclamation of the Gospel of Jesus Christ.”

The 28,000 members of the Ghana Lutheran church “know very much about Ablaze!,”  Fynn said, because the effort has been promoted widely through preaching, school programs, and in other ways.

“It’s always helpful to get together,” Rev. Reginald Quirk, chairman of the Evangelical Lutheran Church of England, said of the gathering of international Lutheran leaders.  “We learn so much from one another and we get encouragement from one another.”

Ablaze! has been favorably received by Lutherans worldwide, Quirk said, because “at the heart of it is a desire to bring the Good News of Jesus to people who need it — and you can’t be against that.”