Kathy Wendling’s eyes filled with tears over the significance of fellow LCMS members joining forces to develop a timely, 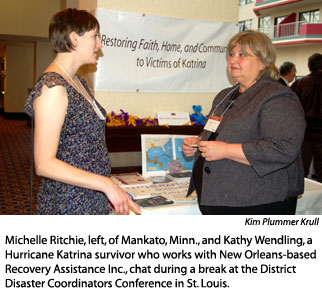 compassionate response to disasters that turn lives upside down.

“I am so touched that this is an issue in the hearts of the people of the church (the LCMS),” said Wendling, whose home and church (Christ Lutheran, Chalmette, La.) were destroyed in flooding after Hurricane Katrina. “I am very proud that, as a church, this is something we are addressing, being pro-active about.”

Wendling, a retired teacher, now serves as director of Congregational Recovery for Recovery Assistance, Inc., a ministry of the LCMS Southern District. She was one of some 70 participants from throughout the country at the first District Disaster Response Coordinators Conference, Jan. 9-10 in St. Louis.

The event drew a variety of people with expertise and an interest in how the LCMS responds to catastrophes — including a San Diego-based FBI chaplain who heads a K9 comfort dog ministry (accompanied by a four-legged first responder) as well as human care committee members from the Lutheran Women’s Missionary League.

LCMS World Relief and Human Care hosted the event to bring together disaster-response partners and present the LCMS congregation-based disaster-response concept that has been in the works since Katrina devastated the Gulf Coast two-and-a-half years ago.

“Our goal is to help you increase your capacity, and the Synod’s capacity, to care for people in need,” said Rev. Matthew Harrison, executive director of LCMS World Relief and Human Care. “You are the people in the trenches, caring for people in need where you are, often on a shoestring, in Christ’s name.”

Rev. Glenn Merritt, director of Disaster Response with LCMS World Relief and Human Care, discussed the concept, which, he said, “we can use to facilitate a coordinated response in a timely manner — a first for the LCMS.”

The concept’s key players are the District Disaster Response coordinators. All 35 districts have been asked to appoint coordinators, most who would serve in a volunteer capacity.

In addition, the concept calls for each district to form a District Disaster Response Team — ideally four to six volunteers appointed by the district presidents or boards of directors. Six regional training sessions for these teams are planned for May and June, to be facilitated by LCMS World Relief and Human Care.

At press time, 14 districts had indicated interest in participating in the regional training sessions, which will cover spiritual care, “compassion team” training to develop listening and responding skills, congregational preparedness, and early-response training. These trained volunteers will work with the district disaster coordinator and team when a disaster hits.

“This concept will enhance the way in which our congregations reach out in their own communities,” said Merritt, adding that an “early Lutheran response at the congregation level is one important segment that has been missing.”

Long after agencies like the Red Cross and The Salvation Army leave a disaster site, Merritt said, “it’s the congregations that remain in the community. Our training focus is on congregation-based response to both enable and empower congregations and their districts to respond in a timely manner on a local, regional, or national level.”

LCMS World Relief and Human Care will supply materials to train congregations’ “early response” volunteer teams in such areas as chainsaw safety, tarp and patch training, and “muck out” training — learning to safely clean up wet, moldy debris — a skill that gained a high profile after Hurricane Katrina.

But perhaps the most important tools for a compassionate disaster response, Rev. Carlos Hernandez told conference attendees, are the ears.

“People want to talk and they want you to listen — to tell you their stories and show you their pictures,” said Hernandez, director of Districts and Congregations with LCMS World Relief and Human Care. Since 1998, Hernandez has provided pastoral care to survivors after hurricanes, tornadoes, floods, fires, school shootings, and more.

“This preparedness is not in contrast to or in competition with LDR,” said Fale, speaking of the collaborative ministry of the Evangelical Lutheran Church in America (ELCA) and the LCMS.

“LCMS World Relief and Human Care is LDR in partnership with the ELCA,” said Fale, adding that he is in regular contact with LDR Interim Executive Director Rev. Kevin Massey, and that Massey indicated he is eager to hear follow-up on the disaster-preparedness training.

LDR responds to disasters, primarily through Lutheran social ministry organizations that serve as LDR affiliates. The niche of LCMS World Relief and Human Care, Fale said, is to “work directly with districts and congregations as part of their ministries to reach out to not only LCMS congregations but also to the larger community to be good neighbors.”

“What we bring as Lutherans in caring for souls is distinct. Luther’s theology of the cross forms the basis of our care,” Fale said. That theology, he stressed, is an intentional part of disaster training and of how LCMS disaster responders work with congregations, districts, LDR affiliates, and people in need.

In the past, LCMS disaster responders operated “too much as Lone Rangers,” said Rev. Dennis Lucero, pastor at Immanuel Lutheran Church, Colorado Springs, Colo., and a member of the Rocky Mountain District disaster-response team. “We have a lot of gifts out there [in the Synod], and we need to be able to marshal our forces more quickly. We need to connect and, within 24 hours, have teams rolling out — not talk about it for three weeks.”

LCMS Southern District President Rev. Kurtis Schultz acknowledged that Hurricane Katrina provided much of the impetus to improve the Synod’s disaster response.  “We can