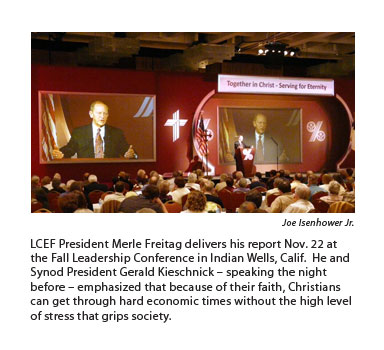 differently —  because of their faith — when faced with such challenges.

Some 660 participants gathered in this desert community near Palm Springs for the Lutheran Church Extension Fund’s (LCEF) annual Fall Leadership Conference, under the theme of “Together in Christ — Serving for Eternity.”

Synod President Gerald B. Kieschnick — in a conference-opening keynote address titled “Leadership in Overwhelming Times” — read from a wire service story that he summarized as “about the fears of people across the United States in the face of a crumbling economy.”

Such fears, he said, are part of a “bigger story” that also includes many other issues such as natural disasters and terrorism.

“How, then, should one lead in such days?” he asked.

Kieschnick reminded his audience that Jesus “dealt with people in tumultuous and overwhelming times in many places in Holy Scripture,” including when he was asleep in a storm-tossed boat on the Sea of Galilee as His disciples panicked. On awakening, He calmed the winds and asked the disciples, “Why are you so afraid? Do you still have no faith?”

“We need to remember in our present time that no matter what overwhelming issues may be challenging us or the people we are called to lead, we are in the same boat [as] a man named Jesus,” Kieschnick said. “No matter what the situation is, we are not facing it by ourselves.  The Lord is by our side, even if it seems in our minds that He may be sleeping.”

“When we as leaders live with this kind of faith and confidence in our own lives,” Kieschnick continued, “the people we lead will observe it and learn from our example that there is nothing to fear when one is in the boat with Jesus. Such faith and confidence enables us to lead with confidence and, in similar accord, set a godly course and direction for the church in the midst of overwhelming times.”

As an example of such confident leadership in hard times, Kieschnick quoted Dr. Friedrich Pfotenhauer, president of the Synod during the Great Depression, from his 1932 report to the Synod convention.

On “the problem of finances,” Pfotenhauer said, “Now all this business stands in direct relation to our great Christian desire to bring Christ’s rest to a sin-weary world.”

Kieschnick said he is especially appreciative of Pfotenhauer’s next words:

“It is true that the present economic conditions throughout the world induce us, if we do not keep our vision clear, to curtail our church activities. No doubt, money is more scarce than in previous years.  All the more, we must keep before us the lesson of history: first, that the more evil the days, the greater the prospect of success in our Christian work; and secondly, that when children of God are eager to promote their Savior’s glory, the Lord supplies the necessary means and blesses them.”

“Leadership in overwhelming times calls for [such] clear vision,” Kieschnick said. “For when we keep our eye on the goal and we keep our people focused on that goal, trusting that the Lord will provide, we will not be swayed from that which the Lord would have us do.

“As we keep the vision clear,” he continued, “we will not fear [or] be afraid of what we cannot do.” What he said next drew spontaneous applause:  “Rather, we will look forward with expectation to what God will do.”

LCEF President Merle Freitag, the next morning in his keynote report to the conference, said he agreed with Kieschnick and that “we are in a really unusual time – but a unique time for Christians to be heard.” In his report, Freitag focused on the economy and LCEF’s ministries, including its support of the Synod’s Ablaze! movement.

He spoke of “the perfect storm” of the economy, caused by various factors that have combined to bring about results including “an accelerated decline in the stock market.”

Noting that fear has replaced consumer confidence for many, he traced the history of recessions in this country, which he said are “usually short-lived and … followed by long periods of prosperity.”

He quoted data from the Synod during past recessions which indicate that church attendance, contributions, and congregational ministries usually grow during periods of recession.

“We can only pray that this recession will, in fact, follow some historical trend and normalcy will return,” Freitag said.

“What can we do with that?” he asked. “We should encourage fellow members to continue affordable spending habits, stay calm, and pray.”

“Christians can provide significant leadership to our country’s economic turn-around,” Freitag said. “We can be the light of the world by demonstrating that our faith is not based on earthly goods, on wealth … but on God [who] in the past, [has] seen us through all the difficult times. And He will do it again.”

Freitag said that although LCEF’s investment portfolio experienced an overall 10 percent four-month decline by Oct. 31, that loss is considerably less than most financial institutions recorded in the same period.

“LCEF operating income, the results of our standard loan operations, remain positive,” he told the audience.  “In fact, operating income is running ahead of last fiscal year to date. Our core operations are solid.”

Although he indicated that many recent LCEF loan requests are smaller than anticipated, Freitag said the number of them is about the same as a year ago.

“This data suggests that our members are being cautious about undertaking large new projects,” he said. “We seem to have prudent people making prudent decisions.”

Freitag urged church leaders to partner with LCEF as it helps address several issues throughout the Synod — including vitality of Lutheran schools, rostered church-worker indebtedness, and stewardship.

He ended his report by emphasizing LCEF’s continued unwavering support for the Synod’ s Ablaze! outreach movement and the Fan Into Flame!  initiative to financially support that outreach.

Other conference presenters included Rev. John Kieschnick, League City, Texas, who spoke at a prayer breakfast on the “paradoxical” qualities of a Christian leader; Christian author Lee Strobel; Terry Kieschnick, wife of LCMS President Gerald B. Kieschnick and speaker for a women’s luncheon; and the Christian humorist kno