This year marks the 85th anniversary of The Lutheran Church–Missouri Synod’s ministry to blind and visually impaired people, “who are everywhere, in every community,” according t 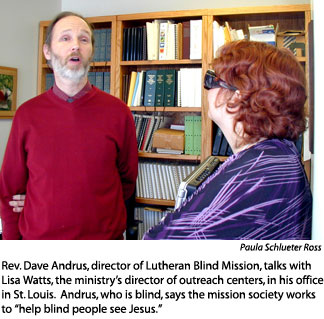 Mandated by convention action in 1923 to serve blind Lutherans, the Synod began the ministry by producing devotional materials in braille.

In 1939, the church body started its Library for the Blind, which provides free, on-loan, braille, large-type, and audiocassette materials to those with limited or no sight.  Today, with more than 6,500 total items available, it is the world’s largest Christian lending library for people who are blind, Andrus says.

The ministry entered a new phase from 1951 to about 1970 by providing “hands-on help” with its Church Parent, or Family Adoptive, Program, which encouraged LCMS families to reach out to blind children with love and support.

In 1999, the first “outreach center for the blind” opened in Pittsburgh; today, 54 LCMS congregations have started such centers (click here for related story).

In 2003, the Synod’s blind ministry — which was part of the Board for Mission Services — became an independent mission society known as Lutheran Blind Mission.  Based in St. Louis, it is now responsible for raising its own financial support.

Today, the ministry continues to produce and lend braille, large-type, and audiocassette materials to blind and visually impaired people nationwide, overseeing more than 30 congregation-based work centers that produce them.

It helps congregations establish “outreach centers” to reach blind and visually impaired people in their communities.

And, it provides training for blind missionaries through its weeklong Christian Blind Institute in July.

To raise awareness of — and support for — blind ministry, Lutheran Blind Mission is sponsoring a Synodwide anniversary campaign this year that includes:

For more information about how your congregation can get involved in blind ministry, contact Lutheran Blind Mission at (888) 215-2455 or blind.mission@blindmission.org.  Or, visit its Web site at www.blindmission.org.