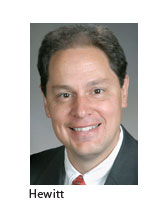 Prior to joining Thrivent in October 2003, Hewitt spent five years as chief administrative officer of The Lutheran Church–Missouri Synod.

In his new position, Hewitt will be responsible for the day-to-day operations of the company and its focus on delivering strong results in 2009 and beyond.  He will report to Chairman, President, and CEO Bruce Nicholson.

“Brad’s experience as a former CFO and CEO and his knowledge of the financial services industry, the fraternal model, and Lutheranism will help us as we continue to deliver the best results for our members,” said Nicholson.  “The CEO/COO model is new to Thrivent Financial, and this new role will further enhance our overall operations, as well as position the company for future growth.”

Hewitt said he is excited to take on his new role.  “This is a great opportunity for the company to deliver even greater results and benefits for our members,” he said.

A native of Bloomington, Minn., Hewitt received a bachelor’s degree in mathematics from the University of Wisconsin, River Falls, and graduated from the Program for Management Development at Harvard University.  He also holds an honorary doctorate from Concordia University, St. Paul, Minn.