HOUSTON—Three LCMS chaplains shared with convention delegates first-hand accounts of their experiences serving as chaplains in the military, as “told” by their dog tags. 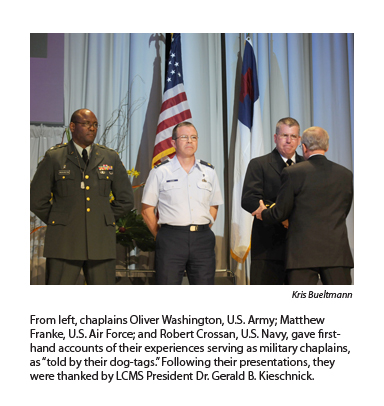 The chaplains addressed some 1,200 voting and lay delegates to the 64th Regular Convention of The Lutheran Church—Missouri Synod meeting here July 10-17.  Each chaplain held his dog tag in his hand as he spoke.

The dog tag worn for 23 years by Army Chaplain Oliver Washington, stationed at Fort Hood, Texas, told how the military identification originated.  During the Civil War, soldiers would pin paper notes with their name and home address to the backs of their coats.  Today’s soldiers are issued two identical tags that list their full name, Social Security number, blood type and religious affiliation.  Washington has shared duplicate sets of his tags with his parents and loved ones to keep them close “in hearts, thoughts and prayers.”

His tag reminds him of Army values:  “Loyalty, duty, respect, selfless service, honor, integrity and personal courage, similar to the principles which our Lord and Savior, Jesus Christ taught His disciples.”

The tag was with him as he ministered to injured and fallen soldiers after the Nov. 5, 2009, shooting at Fort Hood, Texas, when “although these were difficult times, his heart was uplifted when presented opportunities to share the Gospel message.”

Worn for 14 years around the neck of Air Force Chaplain Matthew Franke, stationed at Bolling Air Force Base, Washington, D.C., his dog tag recalled the chaplain’s deployment to Ballad Air Base in Iraq in 2005, where the chaplain talked and prayed with injured servicemen being evacuated to Germany or the U.S. for medical help, “sometimes leaving a piece of their bodies and almost always leaving a piece of their innocence.  Looking up from their litters, they would simply say, ‘Chaplain, would you pray for me?’”

When Franke left Iraq, his tag reminded him that he “hated to leave [the military service members] behind, because they had become your flock and your family.  But you had a family back home.  And after the greatest ministry experience of your life, you embraced your three sons, kissed your wife and held your two-month old baby daughter for the very first time.”

The dog tag worn for more than 25 years by Navy Chaplain Robert Crossan, now stationed at Camp Pendleton, Calif., recalled how he “raced for the bunker for the very first time” at the start of Operation Iraqi Freedom.  “The scene was pure chaos, as everyone scrambled on top of and around each other to put on their gas masks and protective gear for the first time in a real situation.”

But the cross on the chaplain’s lapel “was a reminder of God’s presence even in an awful place and at an awful time.  We were a reminder no less that God was with us–in life, in death, in life beyond death–even as missiles with unknown payloads whizzed overhead.”

“I was there,” remembered Crossan’s tag, “when the pilots returned at all hours of the day and night from their endless, relentless missions.  I was there when some of them wanted to talk to only one person–the chaplain–you.  And I’ll be there when you leave for Afghanistan in just a few days.”

Delegates thanked the chaplains for their stories and their service with a long, standing ovation.