HOUSTON—Delegates to The Lutheran Church—Missouri Synod convention here took formal action to commend the LCMS’ immediate response and continuing follow-up relief work in Haiti in the wake of the devastating earthquake that struck the island nation Jan. 12.  In addition, the president of the LCMS’ partner church, Rev. 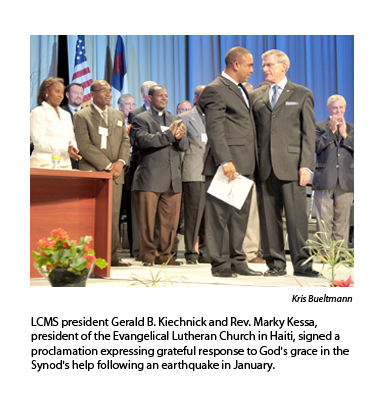 Marky Kessa of the Evangelical Lutheran Church of Haiti (ELCH), expressed appreciation for the LCMS’ response.

The 64th Regular LCMS Convention is meeting July 10-17 at the George R. Brown Convention Center under the theme “ONE People—Forgiven.”  Among the approximately 3,000 participants are some 1,200 clergy and lay voting delegates.

Delegates viewed a video presentation on the LCMS response in Haiti. Kessa was joined by other representatives of the ELCH and a representative of the Lutheran Church in Haiti.

The earthquake resulted in an estimated 350,000 deaths, millions injured and some 2 million left homeless, Kessa said.

“Your spiritual, social and economic support has kept us going despite all odds,” Kessa told the delegates. “The earthquake has turned several cities in Haiti into piles of debris.”  Families are still searching for loved ones, and it will take us many years to recover from the destruction, he said.  Kessa asked the delegates to observe a moment of silence in memory of Jan. 12.

Kessa also warned that Haiti is at risk for hurricanes and that 2 million Haitians are still living in tents.  He also noted that in the wake of the disaster, thousands have joined the church.

“Please continue to support us so that we might serve as Christian ambassadors among hurting people,” Kessa said. “No servant of Christ can live in peace when he or she sees people living in tents and crying out for survival.”

The ELCH president thanked the LCMS for its prayers, financial support, missionaries, and medical teams and supplies. He also expressed appreciation to LCMS World Mission and LCMS World Relief and Human Care for their continuing response to the ELCH and the Lutheran Church in Haiti.

Rev. Glen F. Merritt of Arlington, Texas, disaster response director for LCMS World Relief and Human Care, reported that the Missouri Synod is continuing a six-point response effort in Haiti: cleanup and debris removal, with 400 homes and businesses completed and another 4,000 applications pending; building some 200 homes, including a clinic, orphanage and school; a medical mission project for those affected by the disaster; enhanced ministry and lay training to share the Gospel; development of a credit union, with economic incentives through microloans; and a clergy teaching program.

The resolution expressed “thanks to the Lord for the good work He has done among us,” and specifically named LCMS World Relief and Human Care, LCMS World Mission, Orphan Grain Train, LCMS congregations and districts, Haitian mission societies, the ELCH and Lutheran Church in Haiti. The action called for the Synod to maintain its disaster response and human care capacity so it is ready for the next disaster, and that “enlivened by the gifts of Christ, the LCMS continue to make a bold witness to the world through works of mercy. Soli Deo Gloria.”

LCMS President Dr. Gerald B. Kieschnick and Kessa signed a proclamation expressing grateful response to God’s grace.  Kieschnick and Kessa embraced, and delegates stood and applauded the adoption of the resolution and the proclamation’s signing.
Kieschnick thanked the people of both Haitian Lutheran churches; Rev. Matthew Harrison, executive director for LCMS World Relief and Human Care and president-elect of the Synod; Dr. Thomas R. Zehnder, executive director of LCMS World Mission; and their respective boards.

“Thank God for the responses of many people in The Lutheran Church—Missouri Synod,” Kieschnick said, adding that the people of Haiti “are wonderful people of God who are suffering much.”