HOUSTON—“It’s only the future of the church,” Dr. L. Dean Hempelmann said as he reported efforts to recruit and retain church workers for The Lutheran Church— 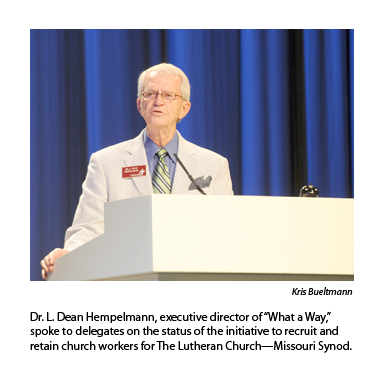 Hempelmann, the executive director of “What a Way,” spoke July 13 to the 64th Regular Convention of the Synod, which is meeting at the George R. Brown Convention Center under the theme “ONE People—Forgiven.”  Among the approximately 3,000 participants are some 1,200 clergy and lay voting delegates.

Hempelmann described “What a Way” as an initiative to rebuild a lifestyle of active recruitment and retention of church workers in LCMS congregations.  He cited the decline in the number of church-work students at LCMS colleges and universities and also a lower number of first-year students at the two seminaries.

He warned of consequences if people of the church take no action. “Congregations will rely more and more on whoever is available,” he said. “My friends, we would become a church without guts.”

“Jesus was urgent in His prayer for the Lord of the harvest to send out workers,” Hempelmann said. “There is an urgency that continues for the church and the world in this day.”

Vie, the vice-chairman of the national cabinet of the “For the Sake of the Church” campaign, noted that enrollment at the institutions now exceeds 25,000 students. He thanked supporters who made gifts to grow the endowments.

“We recognize that all the efforts to make a difference in our society would never happen without the blessings of a gracious God,” he added. “For all the work, we give Him thanks and praise.”