HOUSTON—In a brief message to The Lutheran Church—Missouri Synod convention, Brad Hewitt, chief executive officer of Thrivent Financial for Lutherans, traced how “Lutherans figuring out how to solve problems has resulted in an AA best-rated Fortune 500 company with $70 billion in assets.” 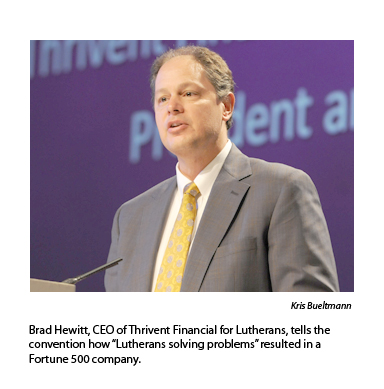 Hewitt spoke July 15 to the 64th Regular Convention the Synod, which is meeting July 10-17 at the George R. Brown Convention Center under the theme “ONE People—Forgiven.”  Among the approximately 3,000 participants are some 1,200 clergy and lay voting delegates.

A century ago, Hewitt said, Lutheran churches sought to provide for widows and orphans by forming self-sustaining fraternal insurance societies modeled after those of trade guilds and societies. A half-century later, Lutherans sought to take care of families, so the local benefit societies came together with modern administrative systems and professional agents.

Hewitt said Lutherans flooded the White House switchboard 25 years ago to keep their fraternal benefit societies tax exempt. Instead of paying millions in taxes, those funds are given to support ministries and charitable services in local and national arenas, he said.

Hewitt said today’s focus on helping families enjoy financial security also brings benefits to the church. He cited a Boston University study that found people who feel financially secure are twice as generous in their giving, regardless of the amount of their assets.

Hewitt said the Thrivent vision is “that all Lutherans can live joyful, generous lives free from worry about money.” That involves financial-security tools, care for community and experiences in generosity, he added.